Model the solar cells first and then to perform simulations, writes Chandrika Ramiah

In this article the behavior of the solar cell with respect to solar irradiance has been studied. Solar cells have been modeled, simulated and analyzed through graphical interpretations. Three types of photovoltaic modules from different companies (50Wp monocrystalline, 50Wp polycrystalline and 50Wp amorphous silicon) have been modeled based on the one-diode model and their maximum power point has been simulated in PSpice AD. The performance of the solar modules has been evaluated in terms of their response variables namely short-circuit current, open-circuit voltage, maximum power point voltage and maximum power point current with respect to real weather data.

Solar cells represent a promising alternative to the increasing demand of energy supply and will ultimately replace the fossil fuel energy sources, which in the long run are deemed to become scarce. There is therefore a need to profoundly analyze and understand how the solar cell operates as an optimal system.

When compared to fossil fuels, the solar cell is a relatively untapped source of energy and as a result there remains a lot of work to be done to make solar cells as efficient and reliable as possible. One approach to understanding the solar cell is by modeling and simulation.

Two common types of solar cells which dominate the market are the crystalline and thin-film PV cells. It becomes necessary to test these cells up to their optimum operating points under real weather conditions. In this respect, practical tests are not the best solution, since the ability to work with the solar cells and to obtain the expected results in practice makes it difficult, time-consuming and costly. An alternative is therefore to model the solar cells first and then to perform simulations without actually building them. After successfully modeling and simulating solar cells, it is then possible to develop methods to optimize system operation.

Current-Voltage characteristic of the solar cell

As can be observed from figure 5, the solar cell is characterized by two key parameters – namely the short-circuit current denoted by ISC and the open-circuit voltage denoted by VOC. In order for the solar cell to reach its maximum power point, it must be operated at or very close to the point where the product of voltage and output current is highest. This point is referred to as the maximum power point (MPP) and is located around the “knee” of the I-V characteristic curve.

Basic model of the solar cell

To properly model a solar cell it is important to understand how it operates. Diode modeling is used in the approximate electrical representation of the solar cell. Diode modeling refers to the use of mathematical models to approximate the actual behavior of real diodes to allow calculations and analysis. 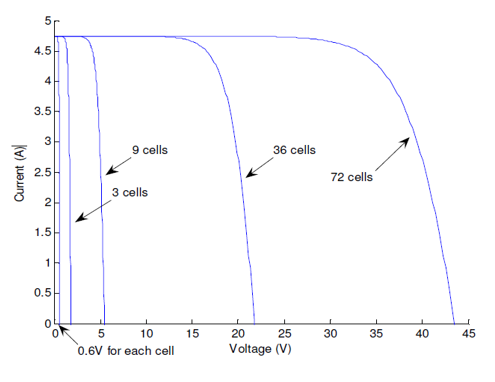 Figure 7: Series-connected PV cells to make up a PV module [19]

Modeling of the solar cell

The modeling of a system over-simplifies practical difficulties and in this research there is no exception to this criticism. To further investigate the solar cell, it is useful to create a model which is electrically equivalent and is based on discrete electrical components whose behavior is well-known. The electrical model of the solar cell which is used in this project is shown in figure 6. Solar cells are primarily made of semiconductor material that when exposed to sunlight induce a short-circuit current, which is proportional to the level of solar irradiance [20]. In order to implement this in PSpice, the value of Isc is assigned to a G-device which is a voltage-controlled current source.

The short-circuit current, Isc,represented by “girrad” in figure 8(a), is given by:

G is the irradiance level in watt per meter square (W/m2 ).

And Jsc is the short-circuit density in Ampere per meter square (A/m2 ) provided by the Solar Cell’s manufacturer’s datasheet at standard (AM1.5G, 1000 W/m2 , T= 25°C) conditions.

Table 1: Description on the solar modules using information from datasheets

The open-circuit voltage, VOC is the voltage with zero current and is given by equation (1.1)

The total power dissipated is calculated by taking into account that the maximum power occurs at, it is possible to derive the maximum voltage VM and current IM as

The voltage at maximum power point, VM is obtained by solving for equation 1.2 using the mathematical tool Matlab which is a high-level language and interactive environment for numerical computation, visualization, and programming [72].

The current at maximum power point, IM is given by equation (1.3) which equals

Most specifically the solar irradiance values obtained between 5am to 6pm on the 26th of November 2012 has been used in this project. The measurements were taken by a pyrometer. The month of November has been chosen because Mauritius is in the summer season during this period of the year and thus it is expected to have a greater amount of sunlight on this day. However the values for solar irradiance were provided with an interval of one minute and therefore an average over a time of three hundred seconds or the equivalent of five minutes has been calculated. Henceforth the behavior of the solar cells/modules with respect to every interval of five minutes over thirteen and a half hours is studied.

Validation of the solar cell model

A mono-Si, polysilicon and a-Si solar cell is modeled as described previously, using electrical characteristics from its respective manufacturers’ datasheet – namely SC Origin SPM050-M datasheet, Sunmodule SW 50 poly RMA and Uni-Solar Solar Laminate PVL-68 solar module datasheet. To be able to use the solar cell model further in the project, values obtained during simulation must closely match the ratings in the manufacturers’ datasheet.

The following figure shows the simulation result of the I-V characteristic of a SC Origin SPM050-M solar cell for irradiance values of 600, 800 and 1000 W/M2. The mono-Si module consists of thirty-six solar cells connected in series and therefore the short-circuit current of one cell is the same as that of the module and is equal to 2.86A while the voltage of one cell is about 55mV using the related equation. As it can be observed from the plot the short-circuit current, ISC, when the irradiance level is highest is equal to 2.86A and the open-circuit voltage, VOC is around the 550mV which clearly corresponds to the rated value on the manufacturer’s datasheet. The simulation has been repeated for the polysilicon and amorphous-silicon solar cells model.

The strategy of modeling a PV module is no different from modeling a PV cell. It uses the same PV cell model. The parameters are all the same except for a voltage parameter (such as open-circuit voltage) which is different and must be divided by the number of cells. In this project both the crystalline modules and the amorphous module are made up of series-connected solar cells. As mentioned in chapter two, when solar cells are connected in series the current remains constant and the voltage of each solar cell adds up.

Figure 10: Schematic for an association of two series-connected solar cells [25]

The schematic illustrating the circuit representation of the series connection of two solar cells is shown in figure 10. It can be observed that the use of subcircuits simplifies the development, analysis and correction of the solar cell model rather than having a single circuit block which represents the module.

Simulation of the maximum power point

The maximum power point of the SC Origin SPM050-M, Sunmodule SW 50 poly RMA and Uni-Solar Solar Laminate PVL-68 solar models is simulated in PSpice based on the concepts covered so far. The mono-Si and polysilicon solar module are both rated at fifty Watt-Peak (50Wp) and consist of thirty-six cells connected in series and the a-Si solar module is rated at sixty-eight (68Wp) and consists of eleven series-connected solar cells. The PV modules will therefore comprise of an equal number of subcircuit files as the solar cells present in the modules. The subcircuit netlist constitutes values of the time period over which solar irradiance has been considered along with the voltage and current at maximum power point. The circuit netlist which is the main building block of the solar module includes the subcircuit files and commands about the type of analysis that is performed. The simulations of IM and VM for the solar modules are performed and the maximum power point attained by the modules with respect to the solar irradiance is obtained by the product of the current and voltage at MPP. The following figures show the results obtained for the simulation of the MPP for the solar modules

Figure 11: PSpice plot for the maximum power point of the mono-si solar module, PM including IM and VM