SCENERY OF THE WORK INTO XV EUROPEAN CONFERENCE:

Solar heating and cooling systems: a POSITIVE contribute to energy and environmental issues

In the last years energy demand for summer air conditioning considerably increased and its trend is still strongly growing. The electric energy request peaks are in fact during summer time, at the same time of air conditioning necessity and, more generally, of cold chain supply.

The increasing of energy price from one side, pollution and climatic changes in place on environmental side, will always have a stronger impact on global ecosystem.

The consumption of primary sources, such as fossil fuels, oil and gas, for heating and cooling, requires a reflection for the protection and preservation of the environment for future generations, as well as for the significant costs involved. Without sacrificing comfort and using in an appropriate way renewable energy sources available, then you will get the desired results about energy efficiency and environmental protection.

The technologies traditionally used for winter and summer conditioning (compression systems with electric motors) bring about overloading of the electricity distribution network, with the risk of electric black-out, although in recent years the values of COP (Coefficient Of Performance) and EER (Energy Efficiency Ratio) of the reversible heat pumps are much improved.

Several research and technological development activities have therefore focused on the study of processes for the cooling of buildings based on innovative technologies that use solar energy (solar heating and cooling) or other alternative energy sources. The use of solar energy in the summer for air conditioning is a technical solution very interesting from the point of view of energy, given the coincidence of the cooling demand with the availability of solar energy.

The European SET-Plan identifies around the sectors most strategically interesting for the achievement of the goals of energy spending restraint from fossil fuels, related to the development of technologies for solar heating and cooling (SHC), especially in the civil (characterized by an increasing energy demand for conditioning environments in residential and tertiary sectors) and industrial sectors, in cases where there is need for process heat at medium temperature.

Considering that in the residential sector solar heating and cooling technologies combined also to energy retrofit on buildings have already shown their worth in terms of energy and environment, a sector in which it is important to test the effectiveness of these innovative technologies is the combination between solar systems and large absorption refrigeration systems, that already characterize the service and commercial sectors with regard to the production of cold for various uses.

Presented CASE STUDY is about a solar heating and cooling system of small power (18 kWf), installed at service of the building F-92 in ENEA Research Center Casaccia (Rome). The energy results obtained, in terms of solar fraction, however, can be extrapolated to installations of higher size.

During winter time, the solar field produces hot water in place of a traditional heat production system fed with fossil fuels; the hot water produced is then stored in an accumulation tank from which it is sent into the building with the possibility of power environment terminals with low and medium temperature.

Space heating from solar energy has been a growing development with the advent of “low temperature” heating systems. The low temperatures heating systems – such as radiant floor systems, ceiling or wall and, in part, the fan coils – have the great advantage of working at supply temperatures that are from about 30 °C, for the former, up to the 45-50 °C required by the latter.

The energy crisis of the 70s, in fact, drew attention to the system measures aimed at mitigating of plant energy consumption and it began to consider use of the heating system terminals able of heating environments using a heat transfer fluid at reduced temperature.

Among these components we can distinguish radiant panels that, although with a higher thermal inertia than other types of terminals (high time constant), provide a thermal comfort superior than that generated by other systems.

The focus on the energy issue, however, has led to enact laws with shrinking imposition about the buildings insulation. Also for this reason, it becomes possible re-modulate the heat power and their thermal level with the consequence of lower temperatures heat transfer fluid use. Thanks to these developments we can construct more reliable plants, with high thermal performance, able to give a valid contribution to the energy needs of the structures through the use of solar energy during winter.

The integration level has grown in same step with the technological advancement of solar thermal systems.

The environment cooling from solar energy has become a valid alternative to conventional systems since, especially in recent years, the electricity summer demand has reached extreme peaks for the excessive use of conventional air conditioners.

The use of solar energy to produce the cooling energy becomes an advantageous opportunity, as evidenced by the numerous pilot projects carried out in other European countries, especially in Germany and Spain. In solar cooling systems cold production is made by refrigerating machines which are fed with the hot water produced by the solar collectors; then heat transfer cold fluid, water or air, depending on the type of machine, is used for conditioning environments.

The use of solar energy for buildings cooling is an attractive hypothesis, because the period characterized by a greater demand for air conditioning coincides with the months during which the solar radiation is at its maximum and days are longer.

The systems that convert a heat input in a refrigerator output can be classified mainly into two types: open loop systems and closed loop systems. Systems based on an open cycle, using water in cooling for the air direct treatment, always require a distribution network of the cold based on a system of ventilation. Closed systems (SYSTEM USED IN THE CASE STUDY THAT WILL BE PRESENTED), however, are made up of chillers powered by heat transfer fluids, hot water or steam, which produce chilled water; the fluid can be used directly in the treatment units of air conditioning plant (cooling or dehumidification system in batteries) or distributed through a network of pipelines to conditioning terminals decentralized in the various rooms to be air conditioned. They can be used with any technology of cooling distribution (ventilation systems, fan coils, radiant surfaces). 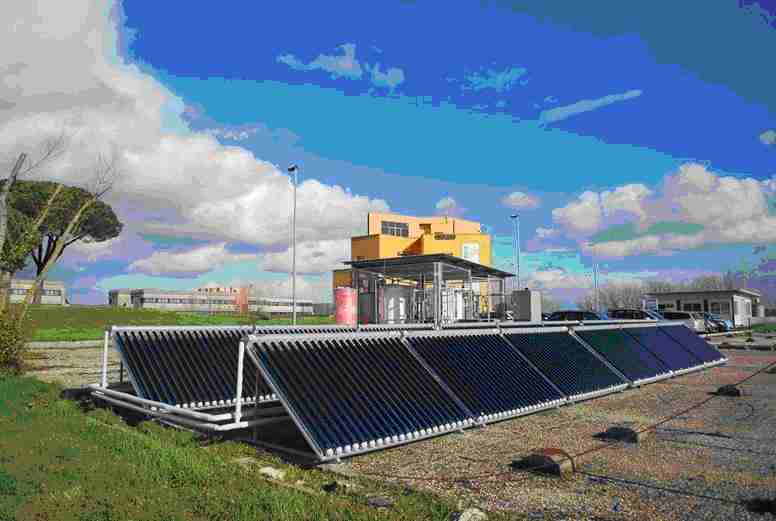 F92 Building is located into ENEA Casaccia (Roma) Research Center and has got a total area of about 380 [m2]. It consists of three floors and one of these is a basement while other two are above ground floor with an area of about 90 [m2], with flat roof to flat roof. The building has an interspace that permits to modify and improve uses according to the research center requirements. The flat roof is used to install monitoring equipments of external climatic conditions. Initially, energy needs of the building for the winter heating and summer cooling were realized respectively with a traditional system that is methane gas boiler combined with radiant panels floor and with air conditioning system made of direct expansion internal units (year 1998). The building has been equipped with one of the first domotic systems to manage in a smart way appliances, artificial lighting inside and security systems to make daily life of old or disabled people easy; these kind of people are possible recipients of such buildings. In 2011 F92 buildings has been subject a strong retrofit where existing system has been replaced with a Solar Heating and Cooling system combined with evacuated tube solar collectors (15 solar collectors with a total area of 56 m2). The installed system terminals consist of both existing radiant panels floor and ceiling cassette fan coils. During winter time, using of radiant panels floor is preferred when hot water produced by solar field is available: in this way, feeding radiant panels floor with low temperature water, solar energy exploitation is maximized to heat environments. If thermal energy issued by radiant panels floor is not enough to ensure environment comfort, integration system boiler starts to feed fan coil system.

Besides using, for the main equipment, high performance system components, a key element for increasing the solar fraction over the entire year is determined by the implementation of appropriate control logic. It has been carefully studied by ENEA and subsequently improved, as a result of the research activity carried out during the experimental monitoring on solar heating and cooling test object.

In March 2013 was completed the installation of a hot water tank of the type of phase change PCM (Phase Change Material, with phase transition temperature of approximately 46 ° C), in order to maximize the solar fraction during the winter working making available for a longer time the hot water temperature needed to power the system radiant floor panels.