Abstract
Absorption refrigerating machines represent an interesting alternative to compression machines, especially when waste heat or heat produced by solar energy is available; the market is proposing small-size absorption machines especially designed for air conditioning in residential buildings. A survey of small-size absorption refrigerators is presented, covering a range of chilling power between 5 and 17 kW and highlighting the productivity of machines.

Since the main obstacle to the market penetration consist on an excessive spreading of prototypes, a study aimed on the definition of common Standard is analyzed, comparing the results with experimental campaigns conducted at the Labs of Department of Industrial Engineering of the University of Perugia. A brief look on the economical aspects and perspectives of this technology completes the paper.

Introduction
The need to ensure high levels of indoor comfort, both in winter and summer, increased sales of equipments for air conditioning. This trend is also confirmed by the growth of electrical energy consumption in the residential sector all over Europe, which is actually responsible for more than 40% of total energy consumption [1]. A survey of 15 European Union countries estimated a total electricity consumption of about 90 TWh, with 33 TWh coming from Spain, 27 TWh from Italy and 10 TWh from France [2].

In recent years, a new role is played by solar energy, which found new interest in systems for the production of cold water (sorption machines) for air-conditioning; these applications are mainly encouraged by the simultaneity between high solar radiation and cooling demand. The machines can be effectively incorporated into so called solar combi-plus systems, where solar energy is used to produce domestic hot water (DHW), space heating and cooling. Thermal driven sorption chillers already know a mature technology in the high power range (chilling power >100 kW), but recently, machines with low chilling power (between 5 and 17 kW) became to enter the market, being included in solar combi-plus systems for small-size applications.

A survey of existing small-size chillers

Thanks to the interesting applicative aspects, some manufacturers began to produce small-size absorption chillers (5 – 17 kW of chilling power), designed to be fed by solar energy. Through an in-depth market research, 6 small size chillers have been individuated, satisfying the above stated requirements and so able to enter soon the market. Low power absorption chillers are not very common and there are no data available about their real performances in long-term applications.

So, the six machines, built by different producers, should be considered more as prototypes rather than as commercially available items [3][4]. The main characteristics of the various machines – identified with the letters from A to F – are reported below.

2) The second system (B), investigated at the Technische University of Berlin and nowadays in the production phase, is a classic absorption chiller that uses H2O-LiBr as working fluid. This chiller, actually, seems to be the most promising one for the simplicity of the hydraulic system and the possibility of solar energy feeding. From the economic point of view, a preliminary analysis, showed a high ratio between initial investment and kW produced.

3) A German producer is launching in the international market a 15 kW absorption chiller (C). It is a system with tested performances but it requires a feeding solar power of 21 kW. It is made up of two separate where evaporator-absorber and generator-condenser are positioned. This chiller realizes the classic absorption cycle and utilizes H2O-LiBr as working pair.

4) The Spanish absorption chiller (D) works with the H2O-LiBr pair and with a nominal refrigerant power smaller than the others (4,5 kW). Unfortunately it is no more in the production phase, because of the financial crisis. This model was very compact and it was available also with an incorporated cooling system that removes the cooling heat from the machine.

5) The Japanese model (E) presents the peculiarity of the absence of the internal circulation pump, and so it is characterized by a total independence of the refrigerant process from any electric feeding; on the other hand, the power output of the system is lowered.

6) Finally, an adsorption machine (F) is also produced recently in Germany, with the main feature that it can work with a thermal power supply of 60°C.

The differences between the cooling capacity of the samples depend on the manufacturers’ construction choices. Samples A and E are those the most influenced by their volumes, which considerably diminishes the relative capacity. Sample E shows poor performance at low cooling temperatures because of its intermittent functioning, which decouples the heat feeding and cooling production environments. Samples A and B behave similarly in terms of global COP, reflecting their common construction philosophy; it should be pointed out that samples A and E weigh twice as much as all the other absorption machines investigated [3].

The market of small-size absorption chiller presents therefore machines able to function with a nominal temperature above 80°C, with a COP higher than 0.70 and a chilling capacity from 4.5 kW to 17 kW. Adsorption machine can work properly at 60- 70°C, with a relative COP of 0,56, so making this kind of solution also suitable to be joined to solar collectors in solar combi-plus systems.

• Difficulty to identify a standard configuration for single chiller.
• Low numbers of machines produced and high costs.
• Absence of knowledge of the system behaviour.

Costs of the investment and the need of experienced designers and installers constitute the most important barriers for a broad diffusion of solar cooling applications.

The definition of standardized system configurations might reduce considerably the design effort for each single application and it could be the basis for the development of package solutions manufactured with the advantage of the large scale production.

Efforts for standardization
Results of an European Research [5] defined a reduced number of system configurations, which can be promoted and applied similarly to the standardized systems for domestic hot water production, which work reasonably well in common applications and are independent by the specific machine considered.

This research started from an extended campaign of numerical simulations carried out in TRNSYS on two basic plant configurations derived from economical and technical analysis. Each participant of the research opted for one of the two plant layouts, which best suited the working features of its own chiller. Within the basic systems, a number of parameters were varied: geographical location, chiller brand, collectors’ type (flat plate, evacuated tube collectors), chilled/warm water distribution system (fan coils and chilled ceiling) and other technical parameters.
Results of comparative analysis showed that the chilled ceiling, wet cooling tower and evacuated tubes collectors configuration allows the solar comby-plus system to give the best compromise between technical and environmental requirements for the three main cities of Europe analyzed (Naples, Strasburg, Toulouse). Two parameters (Heating Degree Days and Cooling Degree Days) are used to evaluate the energy demand of a building, based only on the external temperatures (Fig. 1). Both parameters compare the external temperatures with the in-house ones that always assure conditions perfectly acceptable inside the building all along the year (21 °C in winter, 26° C in summer, calculated for a relative humidity of 50%). 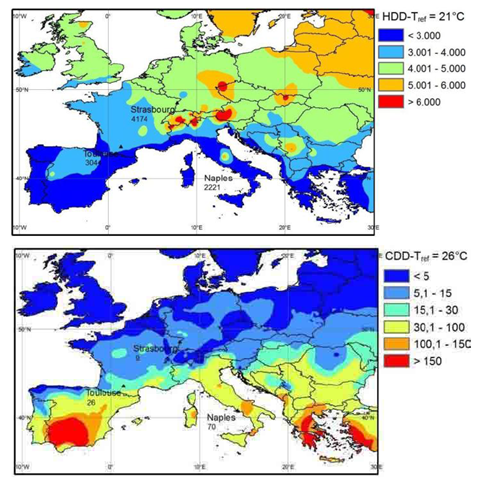 In particular, the final report highlights that well-sized systems are equipped with evacuated tube collectors, with a specific surface of 3.5 – 5.0 m² per kW of chilling capacity, and a hot storage volume included between 50 and 75 litres per square meter of collector area. In these ranges, high total solar fractions can be obtained and the system operates close to the optimum in terms of primary energy savings and costs for each country of Europe.

The reason is easily explained considering that that lower is radiation value, the lower is the chilling load; wider collector surfaces need further investments, that are not justified by the relative better performances in terms of higher solar fractions. A sort of validation of the results obtained by the European Project solar combi-plus is found in the experimental campaigns conducted at the Department of Industrial Engineering of the University of Perugia, where research groups have been actively working on alternative refrigeration technologies and in particular on solar cooling absorption systems.

An absorption system plant [6] has been already manufactured in 2001 to identify the best configuration for producing chilling power from the sun with solar collectors. First results have showed that the absorption machine can work properly (COP 0.50 – 0.60) with a generator inlet temperature (70 – 80°C, even lower than the nominal value); besides, it was showed that a specific surface of 5.0 – 6.0 m2 of vacuum tube solar collectors per kW of chilling capacity is needed to drive the solar cooling system. At the light of the first results and trying to fit the experimental measurements with the theoretical analysis of the European Research [5], from 2006 a solar cooling system (with DHW production in winter) is running with a smaller size absorption machine. The main difference between the standard of the European Research is the tank volume. Theoretical data specify 50 -75 litres per square meter of solar collectors, whereas Perugia’s plant employs 25 litres per square meter; this value derived from the results of the first experiments, where it emerged that a lower volume of the hot tank had reduced the length of the unsteady state conditions, linked also to the inertial thermal loss of all the plant components.

Typically, the whole cost is split as follows: 1/3 chiller, 1/3 collectors and 1/3 the rest (pipeline, pumps, control systems and cooling tower).

Naturally, some differences are found among the various installations; for instance, the cost of Perugia’s plant is about 50.000 € (12.000 € the 5 kW chiller, 30.000 € the solar collectors and 8.000 the rest), but a 8 kW chiller with 30 square meters of solar collectors can be paid 40.000 € in Germany (mainly thanks to the lower price of German solar collectors). If a simple economic analysis is conducted through a comparison with conventional cooling–heating systems (estimated cost equal to 15.000 €, with similar performance), it is possible to evaluate the Payback Time.

Conclusions
Six small size sorption machines have been recently introduced in the market to be employed in solar cooling or combi-plus system in residential applications. A recent European Research Project has fixed the main characteristics for such typology of plans witch are defined in a solar collector surface of 5 m2 for kW of chilling power and a tank with 50 -75 litres per square meter. Such parameters are usable for the different European Countries. Up to now solar combi-plus can have a payback time above 20 years without incentive but the decreasing of price of solar collectors and of absorption machine, along with State incentives, could help the payback time to reach value less than 6-8 years.