INTRODUCTION
Due to a growing global concern about the increasing impact of mankind on the warming of our atmosphere, the refrigerants that have been used as the prime working fluids for air conditioning and refrigeration applications have once more come under scrutiny. Many regulators around the world are now focusing on the direct global warming impact of these fluids.

An example of this is the European directive that will phase out the use of R134a in automobile air conditioning systems starting in 2011 and a complete phase out scheduled for 2017. More recently the United States along with Canada and Mexico proposed adding a phase down in the use of HFCs to the Montreal Protocol calling for a 10 percent reduction by developed nations beginning in 2013, culminating in an 85 percent phase down by 2033.

This paper will discuss properties and applications of these potential refrigerant options in stationary AC&R systems.

Depicted in the table below, are properties of both HF1234yf and HFO1234ze, together with some refrigerants also proposed as replacements for R134a in stationary applications. The properties of the proposed fluids make them suitable as a replacement for R134a. Also shown in the table are Permissible Exposure Limits (PEL) and flammability limits (LFL and UFL). Each of the HFO fluids has very low order of toxicity and is classified as “A” by ASHRAE. It is also important to note that HFO1234ze does not exhibit flame limits when tested in accordance with ASTM E-681 or EU A11. HFO1234ze does, however, exhibit flame limits at elevated temperatures (above 30oC). 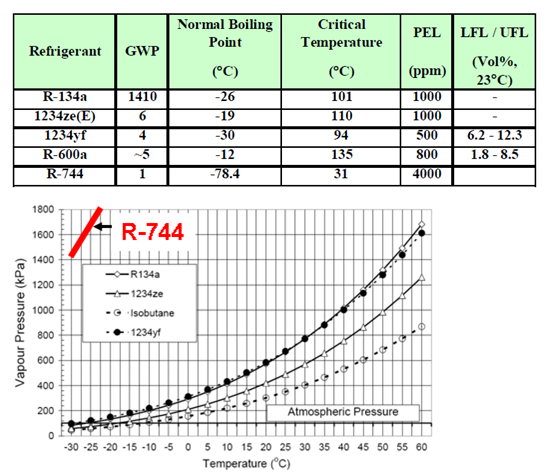 Thermal stability evaluations were conducted using the ASHRAE standard 97 test methods. A typical low viscosity POE appliance oil, ISO 10 (Proeco 10S) was used in this evaluation. Both HFO1234yf and HFO1234ze were tested under extreme conditions: high moisture (1000 ppm), high temperature (200oC) and long duration (2 weeks). Visual examination of the sealed tube showed no change in the appearance (figures 2) of the refrigerant and oil. Results of the analysis of the oil show very low acidity values. In addition, gas chromatography and molecular weight measurements of the refrigerant performed before and after tests show no change in the purity of the material.

One can conclude from this evaluation that HFO1234yf and HFO1234ze are very stable with oils used in these applications. 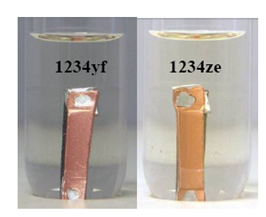 Medium pressure refrigerant application:
HFO1234yf has been selected by certain automakers to replace R134a in MAC. HFO1234yf and /or HFO1234ze either as the pure fluids or blended with other materials, might also offer solutions to replace R134a in many other applications where good efficiency and Low GWP, amongst other properties, are necessary. 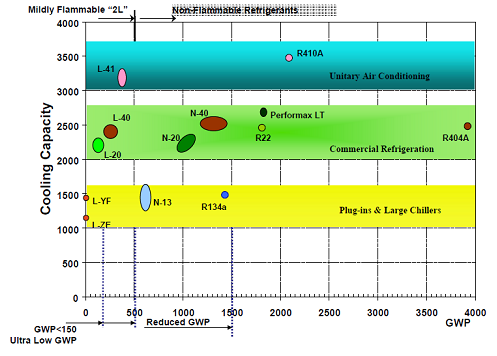 Fig.3 gives an overview of future refrigerant options for various volumetric capacity levels. Several applications are being evaluated with industry. As mentioned above both new HFO molecules can replace R134a in many current applications. Volumetric capacity of HFO1234yf is similar to that of R134a, but with reduction of 99.7% of the direct impact on the environment. HFO1234ze has on the other hand a volumetric capacity 15 to 20% lower than that of R134a. This may be addressed through various changes to the system. Both fluids HFO1234yf and HFO1234ze are potential replacement to R134a and various field trials are in progress.

Figure (4) shows a vending machine under evaluation using HFO1234yf. Encouraging results have been obtained under transient and static tests according to ASHRAE 32.1 standard. These results suggest that HFO1234yf has the potential to replace R-134a in such applications.

Another application where the HFO technology seems promising because of its efficiency and environmental benefits is in chiller applications. Several validations are in progress where HFO1234ze shows promise to replace R134a in such applications. Many other applications where R134a is used today are being investigated with the new fluid. By way of example, use in air conditioning for buses, trucks and trains are currently under investigation. For applications where even mildly flammable fluids are not authorized or desired, there exists a non-flammable solution N13 to replace R134a. This solution is an azeotropic blend, having similar characteristics as R134a but with a GWP of around 600. In fact as shown in fig 3, blends under consideration with a GWP below 500 are likely to be mildly flammable.

There are many applications where refrigerants with higher pressure and higher volumetric capacity are needed. These include many larger refrigeration systems as well as most air conditioning applications. We are in the process of evaluating refrigerants including blends that balance the attributes of higher capacity and low global warming potential while maintaining the efficiency of present systems without significant increases in system cost. Of course this must be done without any significant change to the safety aspects of these systems. A number of refrigerant blends with significantly lower global warming potential (GWP) than current refrigerants, are currently in development. These blends have operating characteristics close to R404A, R407C, and R410A. Although blends can be formulated with a GWP below 150, trade-offs in performance are necessary to accomplish this. Other blends that have a GWP greater than 150 but offer a GWP reduction of 75% to 95% relative to the existing refrigerants can provide a better performance match with existing refrigerants. R404A with a GWP approaching 4000, is widely used in commercial refrigeration. Its replacement with a reduced GWP fluid would make a great contribution to reducing the environmental footprint of commercial applications. Two developmental fluids have been identified N40 and N20. Several trials have been carried out on a supermarket representative cold room. The trials were made with various HFO blends and R404A as a baseline. The trials were made at low and medium temperature applications. N40 can be used in existing R404A equipment with little or no modifications. Its performance was better in both temperature ranges, with 65% reduction in GWP relative to R404A. N20 is destined for new equipment. With a GWP less than 1000, it represents a reduction of more than 75% in GWP relative to R404A, with improved efficiency for both low and medium temperature application. Other option with Low GWP but mildly flammable were also tested. L40 with a GWP below 300 has better performance than R404A in both low temp and medium temp application, with a reduction in GWP of more than 90% relative to R404A. Another blend L20 with a GWP less than 150 presenting a reduction of more than 96% relative to R404A is currently being tested. For reversible Heat Pump, L41 is identified as a potential blend to replace R410A in such applications. This blend, with GWP below 500 has been tested in a Ductless split HP Figure 5, shows the results of the ductless split heat pump at representative conditions of 35oC ambient for cooling and 7oC ambient for heating. The L41 results show improved efficiency in both cooling and heating relative to the baseline refrigerant R410A, however the capacity at the nominal compressor speed was lower. Slightly increased compressor displacement would be needed for capacity to match the baseline refrigerant. To evaluate the performance with a larger displacement compressor the compressor speed was increased approximately 10% and the tests were repeated. Capacity and efficiency results are shown and indicate that performance now nearly match that of R410A. 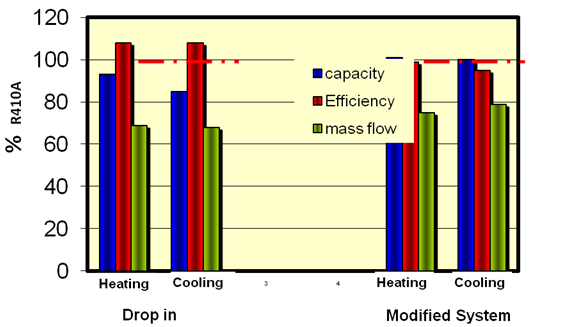 Overall, L41 shows potential to replace R410A due to its performance close to that of R410A. Any difference in performance (vs. R410A) may be addressable through system changes. This performance can be achieved without concern of high discharge temperature and with a GWP of less than 500; it offers a considerable reduction from R410A (more than 75%).

HFO (hydrofluoroolefin) technology may offer significant promise for energy efficiency in a variety of applications ranging from small household refrigerators to large air conditioning and refrigeration systems. Improvements in energy consumption may also be supported with ease of use and safety both within the manufacturing operation, as well as the end user. HFO1234yf has been selected by certain automakers after extensive testing as the fluid of choice to replace R134a in MAC. HFO1234yf and HFO1234ze may have potential in applications such as small commercial and residential refrigeration systems and other areas where a medium pressure refrigerant can be efficiently employed and where low global warming refrigerants are needed or desired.

Unlike other fluids, comparable performance to existing refrigerants in the applications investigated to date show that this can be achieved without significant hardware modification. In addition to further evaluations of applications of these two single component refrigerants; development of higher pressure refrigerants is currently in progress.

Initial evaluation results show promise for both air conditioning and refrigeration applications. Further investigations for these applications include additional performance evaluations as well as flammability risk assessments where appropriate.