Solar parabolic troughs take advantage of the ability of a parabolic mirror to focus the sun’s rays at a specific focal point, writes George Loumakis:

Whenever the public hears about solar energy technologies, their mind revolves mostly around two specific applications. One of them is solar photovoltaics, also known as solar PV, and the other is solar thermal collectors. Solar PV produces DC electricity and has been predominantly used in domestic applications in the past – both standalone and grid connected – as well as a component in portable electronic appliance chargers, pocket calculators, and so on. Solar thermal collectors produce heat, either in the form of hot water or hot air, and are used for heating applications such as hot water heating or space heating. Both forms are very well established and have been around long enough so that they are now considered to be the norm in solar energy applications.

Apart from these two above mentioned solar energy applications though, some other less known ones exist and are beginning to gain momentum. Furthermore, large scale PV plants are beginning to claim their share of the market.  In the following article a brief overview of some of these technologies and applications will be shown.

Although more well-known for their small-scale and domestic applications, some large-scale industrial applications of PV exist. Currently the largest PV plant in the world, the Solar Star plant in Rosamond, California, went live in June 2015. It is rated at 579 MW using approximately 1,720,000 panels and taking up a space of 1,300 hectares. (SEIA, 2015)(Sunpower, 2014)

Solar parabolic troughs take advantage of the ability of a parabolic mirror to focus the sun’s rays at a specific focal point. At that focal point there is a tube, usually a Dewar tube, which contains the solar fluid that is to be heated.  A Dewar tube is a double-walled tube with an evacuated space between the walls and is used to maintain a contained substance at high temperature. (National Renewable Energy laboratory, n.d.)

Two famous examples of large-scale solar parabolic trough plants can be found in USA. The Solana plant, located in Arizona is currently the largest parabolic trough plant in the world that is using molten salt for heat storage. Once the sun sets and there is not enough solar radiation to continue producing heat, the molten salt releases the heat stored, thus being able to keep generating energy for hours after sundown. It is rated at 280MW and takes up a space of 7.8 km2.

A more traditional solar parabolic trough plant is the SEGS plant located in California. The SEGS plant is currently the second largest solar thermal facility in the world while being the largest parabolic trough installation. It is in the Mojave desert and is rated at 354 MW, being able to provide 662 GWh annually. It takes up a space of 6.5 km2 and has 936,384 mirrors in total. To provide a sense of scale, if all the mirrors used for the project were lined up, then the total length would be 370 km. 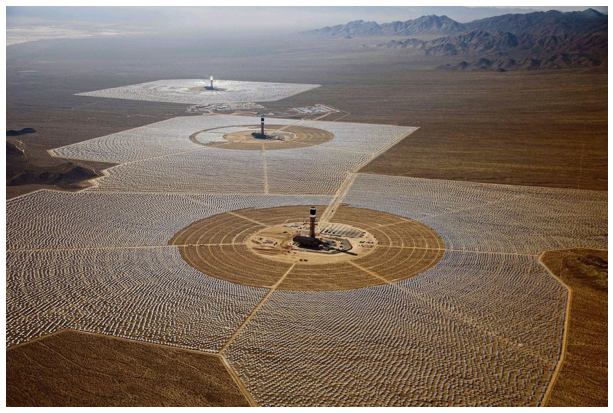 The concept of solar towers is another solar heating project. An array of mirrors using heliostats is tracking the sun and their focal point is located in a tower. The first plant of its kind is the PS10 solar power plant in Seville, Spain. That specific plant can produce steam at 275 °C, which in its turn is diverted to a steam turbine that is able to provide 11 MW of electricity.

A second plant located next to the PS10 plant is also operational. It is called the PS20 solar power plant using the same abovementioned technology and is rated at 20 MW of electricity. Up until 2014 it was the largest plant of this type, when the controversial Ivanpah plant surpassed it.

The Ivanpah solar tower plant is located in the Mojave desert, California, US. It consists of 173,500 mirrors taking up an area of 14 km2. It is rated at 392 MW. It has not avoided controversy because of its need to use natural gas as a start up fuel in order to avoid losing steam over cloudy periods (Breaking Energy, n.d.). The plant currently uses 60% more natural gas than originally planned, leading to some doubts whether it should continue to be classified as a renewable energy project.

Solar furnaces use a very similar technology to Solar towers, that can be used both in small- and large-scale. In smaller scales this application is more commonly found as a solar cooker and will be covered later in the small-scale applications section. Solar furnaces use parabolic mirrors to focus sunlight onto a specific focal point. The fist solar furnace in the world was developed by professor Félix Trombe in Mont Louis in 1949 and has been reported to develop temperatures between 2000 oC up to 3500 oC.

The current largest solar furnace project is located in Odeillo, France. It consists of 10,000 mirrors that redirect sunlight to a large concave mirror. This area that the sunlight is focused is roughly the same as a cooking pot. (P-O Life, n.d.)

A solar pond is pool that is filled with stratified salty water of varying salinities. Because of the density gradient that is caused by the different concentrations of salt, the bottom of the lake accumulates water with greater salinity than the top of the lake.  The water is translucent while the bottom of the lake has a high absorption coefficient. That causes the bottom of the lake to heat up, and in its turn to heat up the very salty layer. The increased density of the layer prevents the heated water to rise through convection, leading to greatly increased temperatures than would be anticipated normally. The heat trapped in the bottom layer of the solar pond can be used in various heating applications.

In the indirect method, the energy needed to drive a conventional desalination plant, whether it is by reverse osmosis, multiple stage flash distillation, and so on, is provided by a PV system. Complementary energy sources such as wind are also often used, depending on where the installation might be located. An example of this set up can be seen in the Utrik Atoll reverse osmosis plant in the Marshall Islands. (The Marshall Islands Journal, 2014)

The direct method of solar desalination uses the principle of the solar still and is mostly used for small-scale applications. Various designs exist, but the working principle is that solar energy is used to evaporate freshwater from brackish or seawater. The saline water is placed in a container and the container is covered with a sloping clear glass or plastic covering. Solar radiation is transmitted through the transparent layer and heats up the container thus causing the evaporation of the saline water. Water vapour then condenses on the interior surface of the covering. It is used mostly in arid regions and smaller scale solar stills are often used in lifeboats or survival kits. The Texas AgriLife Extension Service in College Station, Texas tested four different solar still designs and it was shown that as little as 0.7 m2 of surface can produce enough fresh water for the survival of one person. (Sustainable Sanitation and Water Management, n.d.) 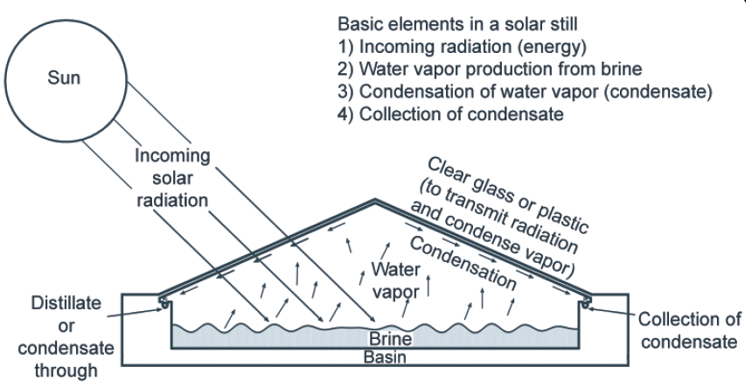 Solar disinfection (SODIS) is a method of disinfection of fresh water using solar energy. The method uses clear Polyethylene terephthalate (PET) bottles that are filled with the water and set out in the sun for at least 6 hours. The UV-A rays in sunlight kill germs such as viruses, bacteria and parasites. The method also works when air and water temperatures are low, but higher temperatures speed up the process. Bacteria, viruses and parasites all have different sensitivities to UV-A radiation, with bacteria being easy to kill and viruses being killed in the 6 hours recommended by SODIS. Parasites might take up to 10 hours to kill, especially cryptosporidia cysts.  SODIS is recommended by the World Health Organisation (WHO), UNICEF, and the Red Cross as a way to treat drinking water in developing countries. (SODIS, n.d.) 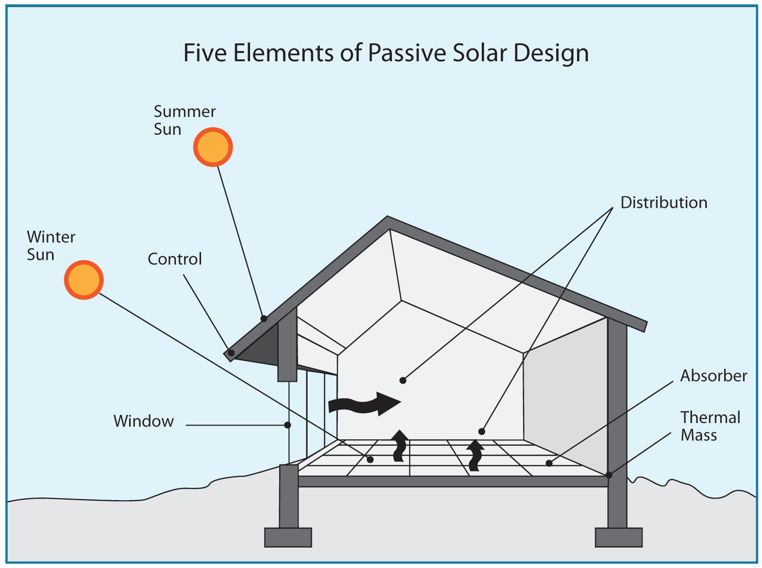 Passive solar design is a method of designing a house in order to achieve heating and/or cooling naturally using the sun .Typically, passive solar heating involves the collection of solar energy through well-oriented windows. The correct orientation depends on which part of the world the building is located and the kind of application that is needed. For all around heating of a house in the northern hemisphere, south-facing windows are used, since they maximise the energy capture throughout the day. The energy that is absorbed during the day is stored in a thermal mass that comprises of building materials that have high heat capacities. These can be Trombe walls, floor tiles, heavy brick walls, and so on. The stored solar energy can be distributed naturally back the surroundings through the naturally occurring mechanisms of convection and radiation. (Whole Building Design Guide, n.d.) (McMullan, 2007)

Passive building design can be used in order to cool a space as well, as the heated elements can cause a natural air circulation if the heated air is directed away from the building, thus drawing cooler air in. This is evident in the case of solar chimneys as can be seen in the picture below

A mention should be made about the small-scale applications that solar energy has as well. As mentioned before, solar stills are very important and crucial additions to lifeboats as well as survival packages, as they can provide a good amount of fresh water using minimal resources. Smaller working versions of solar furnaces can be found in solar cookers. Solar cookers – both commercial and DIY designs – are very popular choices for campers and during outdoor excursions, and have applications in rural communities in developing countries as well.

Solar showers are also a popular choice amongst campers. The simplest design consists of a dark vinyl bag that contains water. The bag is left facing the sun during the day and that provides enough hot water for a shower, or other applications. Different designs, borrowing from solar thermal collectors, exist as well.

This was only a brief mention of some solar technologies that are not as well known as their better-known counterparts, solar PV and solar thermal collectors. It goes without saying that the list is neither exhaustive nor definitive but will serve as a good starting guide on the different aspects of solar technology for anyone interested.

This article was adapted from parts of the Renewable Energy Technologies M.Sc. module taught at Glasgow Caledonian University by Dr. Stas Burek and George Loumakis.

SEIA 2015. Major Solar projects in the US. Available from: http://www.seia.org/sites/default/files/resources/PUBLIC MPL 9-29-2015.pdf.