Nanofluids are a new class of fluids which promise to significantly enhance thermal, rheological and tribological properties of technological fluids. They are obtained by dispersing solid nanoparticles (diameter <100 nm) made by metallic oxides, metals, carbon nanotubes ecc. in common fluids such as water, glycol, oils and refrigerants.

E.g., also at relatively low concentrations of nanoparticles, it is possible to get strong enhancements of thermal conductivity and heat exchange coefficients, with a corresponding enhancement of energy efficiency of plants and components employing such fluids. Other parameters influencing the performance of nanofluids are material, shape and size of nanoparticles, Zeta potential and pH of the colloidal solution, type and concentration of dispersants. Many are the potential applications for nanofluids in HVAC&R. As secondary fluids, they can be applied in commercial refrigeration, chiller, solar panels in absorption systems. As nanolubricants, they can improve thermal dissipation, anti-wear and extreme pressure properties of compressors lubricants. The dispersion of nanoparticles directly in the refrigerant can improve the thermodynamic performance of refrigerating machines. In this paper, the state of the art for the main thermal and tribological properties of nanofluids will be presented with special reference to HVAC&R applications.

In the last decades, a strong tendency to get more and more compact and efficient heat exchangers has been observed. Smaller and more efficient devices allow to reduce energy consumption, fluids charge, environmental impact. Mini- and micro-fin tubes or micro-channels are the most interesting solutions to improve heat exchangers efficiency, but these technologies are probably at their superior limit of development. A new opportunity to significantly increase the heat exchange is given by putting attention on the fluid performance. Within its activity on miniaturisation of heat exchangers, Choi, at the Argonne Laboratory, had the intuition to mix nanoparticles to liquids to improve their thermal conductivity obtaining what he called “nanofluids”. The idea to enhance thermal conductivity of fluids by mixing metallic particles date back to 1873, when it was first proposed by Maxwell, considering that solids have thermal conductivity (λ) orders of magnitude higher than liquids (Figure 2). 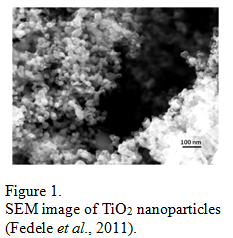 However, millimetric or micrometric particles have a strong tendency to deposit and cannot be employed in microchannels because of possible channels obstruction. The use of nanoparticles promise to get much more stable fluids, no obstruction, low wearing and huge enhancements of thermal conductivity and eventually of heat transfer coefficients with respect to the base fluid (Choi, 1999). Moreover, adding nanoparticles to lubricants can significantly improve,beyond their thermal properties, also their tribological properties, with benefits to the life cycle of machines with moving parts (i.e. refrigeration compressors).

2.1. How to produce nanofluids 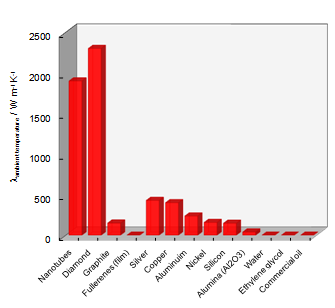 Nanoparticles are extremely interesting because physical behaviour of mat erials is different at nanometric scale than at higher scales, and thermal, mechanical, optical, magnetic, and electrical properties are superior to those of conventional solids. The main feature leading to these properties is the relatively high surface-area to-volume ratio. Nanofluids are obtained by dispersing nanoparticles in common liquids like water, ethylene glycol, oils etc. The first need is to obtain a stable and homogenous colloidal solution for successful reproduction of properties and interpretation of experimental data.

The techniques applied to this purpose are:

a) two-step method: nanoparticles powder is put into the base fluids and physically dispersed by strong mechanical stirring, low or high energy ultrasounds, ball milling, high pressure homogenisation (Fedele et al., 2010), thus obtaining nanofluids with different particle/fluid combinations. This technique is suitable for the dispersion of oxide nanoparticles, while it is less effective for metal nanoparticles, because of their greater tendency to create agglomerates with negative effects on the physical properties;

b) single-step methods: in this case, synthesis and dispersion of nanoparticles into the fluid take place simultaneously.

In any case, dispersants (with steric or ionic effects) and optimisation of parameters, such as pH and Zeta potential, could be necessary to ensure stable solutions (Xinfang et al., 2007).

The most studied property of nanofluids is at present certainly thermal conductivity, while much less viscosity, heat transfer coefficients or tribological properties experimental data are available in the literature. 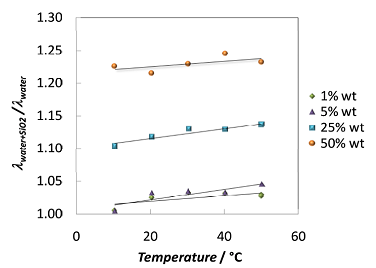 In general, the enhancement increases with nanoparticles concentration (Xie et al., 2009). Nanofluids have also strongly temperature-dependent thermal conductivity (Das et al., 2003b): enhancement of Al2O3 or CuO nanofluids is 2 to 4 times that of the base fluid over a small temperature range (20°C to 50°C). In Figure 3, the typical dependence of λ on temperature is shown for the water-SiO2 nanofluids at different concentration (Bobbo et al., 2011a). This arises the interesting possibility to develop smart nanocoolants “sensing” their thermal environment and preventing hot spots. A comprehensive bibliographic analysis of literature on thermal conductivity is presented in (Yu et al., 2008).
Viscosity: knowledge of viscosity (μ) behaviour of nanofluids is essential to evaluate increase/decrease of energy required to pump the fluid through the hydraulic circuits. Nanofluids can behave like Newtonian (Das et al., 2003a) or non-Newtonian (Wang et al., 1999) fluids depending on concentration and shear stress. Also the size of particles relative to tube size can influence the viscosity (Jang et al., 2007). Dilute limit (e.g. nanoparticles concentration <0.2% for CuO-ethylene glycol) is recognised for the zero shear rate viscosity, which increase abruptly over the limit. Aggregation of nanoparticles strongly enhances viscosity (Kwak and Kim, 2005). In general, an accurate selection of the particle shape, size, materials, and concentrations is necessary to enhance heat transfer without large penalisation in pressure drop. In Figure 4, the viscosity enhancement, due to particle concentration, is evident for the water-TiO2 nanofluid (Bobbo et al., 2011b). A review on rheology of nanofluids is available in (Chen and Ding, 2009). 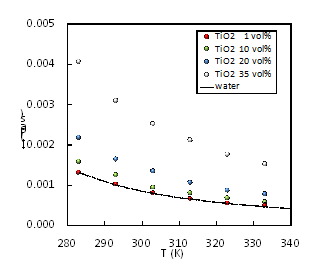 Despite an exponential increase in experimental and theoretical investigations on nanofluids, still a lot of research is needed to fully understand their behaviour. A big issue concern the production of stable and reliable fluids, by developing more suitable methods of production and nanoparticles dispersion. Experimental data are still scarce for some properties (e.g. viscosity and heat transfer coefficient) and frequently incongruent among the various laboratory. Much higher repeatability must be achieved. The influence of size, shape, concentration and material of nanoparticles from both the experimental and theoretical point of view must be deeply explored. Last but not least, the application of nanofluids to industrial systems require experimental tests on real plants to evaluate long term behaviour of nanofluids in terms of stability, wearing, material compatibility, energy efficiency, fouling etc.

Nanofluids give an important opportunity to improve the thermodynamic and mechanical performance of refrigerating machines. Adding nanoparticles to the working fluids can significantly increase their transport properties and then the energetic efficiency of the system, even if the influence on pressure drop must be carefully evaluated. Moreover, lubricants can improve their tribological properties (lubricity, anti-wear properties, extreme pressure behavior) with clear benefits for the compressors. Some results on nanorefrigerants and nanolubricants are already available in the literature (Saidur et al., 2011) and are partly reported here below. However, much wider research is required to develop optimal and reliable nanofluids for HVAC&R applications. Nanofluids as secondary fluids in refrigeration systems are amongst those described in the previous chapter and will be not considered here.

a) Pool boiling heat transfer: the behavior of CNTs in R22, R123 and R134a were studied by (Park and Jung, 2007; Park and Jung, 2007) showing generally an enhancement with reference to the base fluid, with a maximum of 36.6% at lower heat flux. Nanorefrigerants formed by TiO2 and R11 (Wu et al., 2008), show enhancement at low nanoparticles concentration, but a deterioration at high concentrations. Several other papers reports deterioration of pool boiling performance for different nanofluids (e.g. Wen and Ding, 2005). Effects of CuO nanoparticles on R134a/lubricant pool boiling heat transfer were investigated by (Kedzierski, 2009). Nanolubricant with R134a and 2 vol% CuO produced significantly smaller pool boiling heat flux than that exhibited with R134a only, while 4 % volume fraction nanolubricant had boiling heat fluxes that were on average 140 % larger than those with the 2 vol%, suggesting the existence of some threshold CuO volume fraction to enhance heat transfer, compared to boiling without nanoparticles. A very important feature of nanofluids is that they can give a threefold increase in critical heat flux (CHF) over that of water at an Al2O3 concentration of 10 ppm (You et al., 2003).

b) Flow boiling heat transfer: results for pool boiling cannot represent flow boiling behavior, thus dedicated experimental measurements are necessary. Flow boiling of nanorefrigerants formed by CuO and R113 were investigated inside a horizontal smooth at various mass fluxes, heat fluxes, inlet vapor qualities with mass fractions of nanoparticles from 0 to 0.5 wt%. The heat transfer coefficient of nanorefrigerant was larger than that of pure refrigerant, with a maximum enhancement of 29.7%. (Peng et al., 2009).

Nanofluids in refrigerating systems: nanorefrigerants/lubricant fluids have been tested in some refrigerating machines to evaluate their effects on the energetic performance. TiO2 nanoparticles enhanced the solubility of R134a in mineral oil (MO), improving the performance of the refrigerating machine at the same time by returning more lubricant oil back to the compressor compared to systems using R134a and POE oil (Wang et al., 2003). Similar nanofluids based on TiO2 nanoparticles and mineral oil were tested in a domestic refrigerator. The nanofluids showed to work normally and safely in the refrigerator achieving a 26.1% lower energy consumption with 0.1% mass fraction TiO2 nanoparticles with respect to the R134a/POE oil system. Same tests with Al2O3 showed little influence of the kind of nanoparticles on the refrigerator performance (Bi et al., 2008). Nanofluids obtained by addition of NiFe2O4 nanoparticles in naphtene based mineral oil (MNRO) showed good solubility in R134a, R407C, R410A and R425A. Tests on RAC units showed that significantly higher EER are achieved using MNRO/R410A as working fluid instead of POE/R410A (3.2-6.8% in cooling mode, 4.0-6.0% in heating mode) and also MO/R22 (Wang et al., 2011). TiO2-R600a nano-refrigerants were used in a domestic refrigerator without any modification. The refrigerator performance was then investigated. Results of energy consumption test and freeze capacity test indicate that the nanorefrigerants work normally and safely in the refrigerator, with 9.6% less energy consumption for 0.5 g/L TiO2-R600a nanorefrigerant than the pure R600a system. (Bi et al., 2011)

Tribological properties of nanolubricants: some papers are available in the literature reporting the results on investigations about tribological properties of lubricants with addition of nanoparticles. The effects of adding fullerene nanoparticles to mineral oil for refrigeration (4GSI, Suniso) were studied (e.g. Lee et al., 2009). Lubrication tests of a sliding thrust bearing in scroll compressors were conducted in a closed chamber with the presence of refrigerant R22, showing improved lubrication property (lower friction coefficients than base oil) at normal loads <1200 N, and negligible improvements at higher loads. At different volume concentration of fullerene nanoparticles (from 0.01 to 0.5 vol%) lubrication tests showed that nano-oil containing the higher concentration of fullerene obtained lower friction coefficient and less surface wear.

The effects on tribological properties of adding TiO2 and CNH nanoparticles in SW32 POE oil have been investigated by (Bobbo et al., 2010) showing that while the anti-wear properties of the two nano-oils studied were poorer in comparison with those of the base lubricant, the best performance in terms of extreme-pressure behaviour was obtained by the SW32/TiO2-oil (Figure 5). On the other hand, nanoparticles dispersion in the base oil did not affect significantly the solubility, suggesting the independence of the thermodynamic properties of the oil from the presence of nanoparticles.

Available data suggest nanofluids promise to be a very efficient alternative to traditional fluids, giving the possibility to enhance transport properties, mainly heat transfer, of working fluids and tribological properties of lubricants. In particular, nanofluids can be successfully applied to HVAC&R systems, improving plants energetic performance and life cycle of compressors. However, a wide experimental and theoretical work is necessary to select and optimise nanofluids depending on applications requirements. For this reason, a new laboratory on nanofluids has been developed at ITC-CNR in Padova. High accuracy nanosizer, rheometer, hot disk thermal conductivity meter and a circuit to measure the heat transfer coefficient at constant heat flux have been installed to evaluate the stability and measure the rheological and heat transfer properties of nanofluids. The first results have been obtained and a wide research program will be developed in the near future.