Conventional solar heating panels are a well-established technology, still suffering however of low efficiencies and rather high investment costs when medium temperature applications (i.e. space heating purposes) are required. The main reason is that the working temperature in the solar panel is strictly coupled to that of the water inside the boiler: this means that high efficiency can be reached only for relatively low working temperatures (not above 50°C) or for very high solar irradiation G values (above 800W/m2). These conditions are for instance hardly reached in winter, when the majority of yearly heating supply (electrical or gas) is required, and the mean coefficient of panel exploitment over the year is quite low.

The use of solar assisted heat pump (SAHP) systems here presented is based on the concept that the solar panel can work as the cold-side of an inverse cycle operated as a heat pump, with the hot side devoted to the heating system. The concept is not new [1, 2] and has the advantage of decoupling the boiler (that is the condenser-side) temperature from the solar panel (that is the evaporator-side) temperature. However if conventional on-off technologies are used to drive the compressor of the plant, not so high coefficients of performance are reached (in the range 2.5-3.5, which is not particularly favourable if compared to actual air cooled heat pumps) and several difficulties are still present to adapt refrigeration capacity to the solar heat rate, which is continuosly changing during the day and with seasonal climate.

Figure 1.Layout of a DX-SAHP (on the left) and operating prototype (on the right, University of Genoa) DX-SAHP configuration (small device with 1m2 solar panel and 100W VCC compressor). The panel can be just for hot water applications or can be also an hybrid panel (refrigerated PVT panel).

In recent years direct-expansion solar assisted heat pumps (DX-SAHPs) [3, 4, 5] have been deeply analysed, both from steady-state and dynamic point of view. Figure 1 shows the layout and the prototype developed at the beginning of years 2000 at University of Genoa.

In DX-SAHPs several difficulties in the development of dedicated variable speed compressors (VCC) and the need of large panel surfaces when turning towards medium scale (single building instead of single apartment) applications made the indirect SAHP configuration, usually with a water-to-water heat pump  (W-SAHP),  more reliable and promising.

The simplest reference configuration for a thermal solar water heater is shown in Fig.2, where the main components are evidenced: the solar panel (be it simply a thermal or an hybrid PVT panel) at temperature Tp, the boiler and water storage at temperature TH, the refrigeration system (typically a water-water heat pump) and the user. An auxiliary water heater (electrical or gas-fired, not shown in the figure) must be used to satisfay correctly the “useful duty” needed for the user. Furthermore a by-pass can be introduced for further saving energy purposes, when solar and climate conditions are particularly favourable and allow the SAHP to work as a traditional solar panel.

The panel efficiency hp is the ratio between the captured mean thermal energy Qp (given to the working fluid) and the global radiation heat flux incident on the panel, GA (G solar insulation, W/m2 and A solar panel surface, m2):

As well known hp is rougthly a linear decreasing function of the temperature difference Tp-Ta, and increases with solar insulation G. Introducing the non dimensional parameter d we have:

where K, in the range 6I10W/(m2K), is a global thermal conductance between the solar panel fluid and the ambient temperature.

As already mentioned, while in traditional solar thermal panels Tp=TH, the working fluid can give useful heat only for Tp>TH, in SAHPs the Tp value can be regulated at any desiderated value by the refrigeration system, thus increasing significantly the panel efficiency (as shown by eq.2 when Tp becomes as low as or even lower than Ta).

The new concept operations can be briefly described as follows: a proper refrigeration fluid is used to keep the solar panel temperature near to the ambient temperature, giving maximum hp and giving maximum regulation flexibility to the TH value, which can be easily adapted to the user (Tu=TH) needs, thanks to the condenser exploitment. 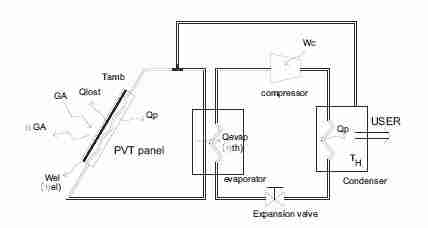 Figure 2.Sketch of the usual solar assisted heat pump (W-SAHP with a Water-water heat pump). The panel can be just for hot water and heating applications or can be also an hybrid panel (refrigerated PVT panel).

A similar innovation (Figure 1) has been tested for several years at University of Genoa (DIME), however heat pump performance coefficients of the order of only 2.6 have been reached due to the very small size of the plant (1kWT). Despite that, the solution offers several very important advantages, such as the highest solar panel efficiency, longer working times of the panel, which could be operated continuously from sun rise to sun set. Furthermore, much lower panel surfaces are necessary for given heating needs, thus cutting down the installation and surface costs, with benefits also for the visual impact of the system. A further advantage is the possibility to use this technology coupled to hybrid panels, enhancing also the photovoltaic conversion efficiency, thanks to the lower mean-working temperatures of the PV panel during the day.

These advantages are paid for in terms of electrical energy consumption by the compressor and assume we are able to regulate quite well the given compressor power, not only in terms of rotating speed, but also in terms of pressare drops in the expansion valve. Only in recent years such characteristics have been achieved, making similar solutions to be envisaged also in the small refrigeration plants.

The development of large solar assisted heat pump systems is becoming more and more interesting for low temperature applications, such as swimming pool water heating. An interesting pilot plant was designed and built in Sestri Levante, with quite interesting expected energy savings.

Figure 3. shows the plant layout of the “bare” panels installed on the roof of the swimming pool building, with more than 400m2 solar panels deployment and a nominal power of about 150kWT.

The basic design concept of figure 3 is the same as in figure 2, but all the control and gas-burner integration devices are shown, including by-pass regulation and auxiliary heat exchangers.

The plant, which is operating from July 2012, is able to cover almost the 60% of the winter (from November to March) energy needs of the swimming pool location, covering the 100% of the needs from April to October (just using the by-pass configuration, with almost zero primary energy consumption). The mean solar panel efficiency is about 85% and mean heat pump efficiency COP=5.5 can be reached.

Since these quite interesting results were obtained just in a quite favourable location, a detailed efficiency and energy saving analysis was performed for a lot of locations and different climate conditions, well described by means of the concept of degree day and monthly mean ambient temperature and radiation data.

Figure 4.Energy saving index values (PES), referred to the days degrees (DD) of all the 110 Italian Municipalities (monthly averaged calculations and yearly-based values). Linear regression and correlation coefficient are evidenced. Only The cities of Trento and Varese show a strong departure from mean data.

The results of this exhaustive research, with calculations performed over all of the municipalities in Italy, are reported in figure 4. It is quite evident how the potential energy savings are well correlated to the degree days and offer, even in a mean annual calculation based on the mean monthly ambient temperature, potential savings up to 50% in mild climates and well over 35% in much more cool regions. Indeed, keeping in mind that in cold regions the heating user loads are quite high and that the installation cost of bare panels is quite low, the expected economic return of W-SAHPs is quite favourable.

Further advantages are expected when hybrid PVT panels are used coupled to W-SAHPs. Several applications are available now in northern Italy (more the 1000 small plants) and a medium size plant is now under construction at University of Genoa (Italy) for the electrical and thermal energy needs of a Sport building application. The PVT panel layout is shown in Figure 5 together with the PVT panel solution going to be used, and a summary of the expected performance and operating data is reported in Table 1.

Figure 5.Layout (on the left) of a hybrid PVT plant for electrical and thermal energy needs of the Sports Building Carmine Romanzi at University of Genoa (Italy). Peak electrical power 20kWE, peak thermal power 45kWT. The hybrid panel is shown on the right.

The present work was developed in the framework of a project supported by Regione Liguria), on the basis of an original idea of the authors and a proposal of technological innovation promoted by Soc. Zenacalor Ing. Pio Benzi of Genoa, Italy.