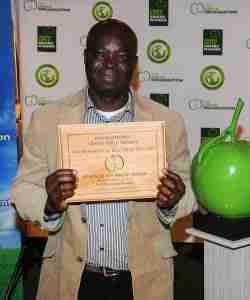 The REI is pleased to announce that REI Alumnus and MREI Member Julian Igbo has achieved an international Green Apple Award 2015 on behalf of his work on the first Solar Tree in Africa. This is the second time that Julian has won an international award for his project, following his win in 2014. Please read on to find out more about this important project and Julian’s achievements over the last year.

Read below for more details of his project, which made the headlines on the 21st August 2014 Mr Igbo will receive the Green Apple Award trophy during a presentation ceremony held at the Houses of Parliament in London, on 10th November 2014. Mr Igbo, who used the knowledge he gained from REI Solar Energy training to create “The First Solar Tree in Africa” Project, has been selected as one of the winners of the prestigious Green Apple Awards 2014 for Environmental Best Practice. A recent student of REI training courses, Julian Igbo, is to receive an International Award at the Houses of Parliament later this year in recognition of the work he has done to promote best practice in renewable energy worldwide.

Upon being told about his award, Julian said: “I must say, I got a lot of knowledge from [the] REI, and I thank the REI for the good work they are doing to promote green and energy sustainability.” The first solar tree was installed in Nigeria and has 36 branches representing the 36 states of Nigeria and the centre Abuja. It is made up of leaves and LED lights, and works from 6.30pm to 6.30am. The REI, which works with the United Nations Environment Programme and major universities to promote best practice in Renewable Energy and Energy Efficiency, wishes to congratulate Mr Igbo on his achievement. The Green Apple Awards, launched in 1994, have become internationally recognised for identifying businesses that demonstrate environmental best practice.