The potential for reducing CO2 emissions assuming a 30% share of heat pumps in the building sector using technology presently available is about 6% of the total world-wide CO2 emission.

The old aim of governments was to supply their country with sufficient low-cost energy to keep the economy growing. But in the meantime we have some more problems: the one problem is that energy becomes more and more expensive, the second problem is climate change, and all industrialised countries, which have signed or not yet signed the Kyoto Agreement, have to reduce their greenhouse gas emissions, mainly CO2 from burning fossil fuels. Heat pumps offer the possibility of reducing energy consumption significantly, mainly in the building sector, but also in industry.

The second law of thermodynamics shows the advantages: While a condensing boiler can reach a primary energy ratio (PER) of at best 105 % (i.e. the boiler efficiency; the theoretical maximum would be 110 %, based on the lower calorific value), heat pumps achieve 200 % and more. 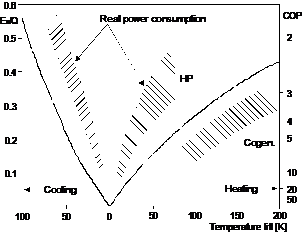 The coefficient of performance (COP) is shown at the right-hand scale: COP = Q/Ex. The internal efficiency is given by the ratio  = COP/COPideal at T. The left-hand area refers to cooling: freezing, refrigeration and air conditioning including dehumidification, the right-hand area refers to heating: The heat pump area shows a temperature lift of 5 to 70 K, Ex/Q is between 0.08 and 0.45 and COP therefore between 2.2 and 12.5, the efficiency  is about 0.4…0.7. The important term for the COP is T, the temperature lift in the heat pump. This T depends on the temperature of the heat source, which can be increased by using the ground as heat source instead of ambient air, and by the temperature required by the heat sink. In highly insulated buildings with floor heating systems this temperature can be reduced to values below 30°C, so T can be reduced to 20 K. The coefficiant of performance of the area “Cogeneration” is different: Here the real exergy loss is smaller than the theoretical one because of reduced turbine losses and condenser losses.

1.2. Performance Factors
The drive energy of heat pumps is most commonly electricity, and for the future improved power generation systems based on renewable and fossil fuels have to be taken into consideration. The power plant efficiency, PP, is up to 58 % for gas-fired combined-cycle power plants available on the market; with oil as fuel similar values are possible. The power plant efficiency PP depends, of course, on the kind of fuel (primary energy source).
Table 1 shows the relations for the more important primary energy sources and for heat pump SPFs of 4 and 5. PER is highest for direct power generation from renewable sources such as hydro, wind or solar, for which PP = 1.0 by definition. More information than by PER is, however, given by comparing, for a given fuel (primary energy source), the efficiency of the indirect path via power plant and heat pump (PER) to the efficiency of the direct path of conversion (B), e.g. in a heating boiler. The ratio may be called Useful Energy Ratio UER = PER/B. Comparing the same fuel means that all upstream effects cancel each other out.

2. APPLICATIONS
The term heat pump is used for a unit producing useful heat. In Japan and in the USA reversible air conditioning units are called heat pumps. Chillers are more or less always called chillers, even if they are used as heat pump chillers producing also useful heat. In Europe the term heat pump is used for heating-only units with the heat sources outside air or exhaust air from the ventilation system, ground and ground water, combined with hydronic heat distribution systems (Gilli, Halozan 2001).
Taking different applications of heat pumps several items have to be taken into consideration like drive energy, design of the unit, integration into a system and control strategy:

1. The drive energy of heat pumps is most commonly electricity, and for the future improved power generation systems based on renewable and fossil fuels have to be taken into consideration. The power plant efficiency is up to 58 % for gas-fired combined-cycle power plants available on the market; with oil as fuel similar values are possible. The power plant efficiency depends, of course, on the kind of fuel (primary energy source). PER, the primary energy ration, is highest for direct power generation from renewable sources such as hydro or wind, for which the power plant efficiency PP = 1.0 by definition. PER gives an absolute measure of the units of useful cold/heat obtained from one unit of primary energy at power plant input.
2. The second item is the efficiency of the unit, which is most commonly expressed by the COP, the coefficient of performance. This COP depends besides the temperature lift required on the refrigerant selected and on the components used like the compressor, the size and the design of condenser and evaporator, the flow sheet and the internal cycle control. The choice of the refrigerant is most commonly a compromise between efficiency and cost.
3. The third item is the integration of a unit into a system, and again the choice of the refrigerant may have a large influence on this integration. The most efficient way of heat absorption/heat dissipation is direct evaporation/direct condensation. Secondary loop systems require an additional temperature lift and most commonly circulation pumps with an additional power consumption. However, the unit itself can be designed as a compact unit and the refrigerant content can be minimised. Additionally, if heat absorption/heat dissipation happens in spaces with public access, the working fluid has to be a safety refrigerant, flammable and/or toxic fluids cannot be used. But there are lot of applications, where the secondary loop system already exists, for example hydronic heating systems or cold water based air conditioning systems.

4. The fourth item is the real operation of the system combined with the control strategy selected, and the operation of the system shows not only full-load, but mainly part-load: many units loose a lot of efficiency operated in part-load. The influence of part-load can be reduced significantly by variable speed drives – not only for the compressor – and by using stores. Taking all this operation modes one will get the SPF, the seasonal performance factor, which includes the cold/heat output, the drive energy at the different operating conditions, and the parasitic energy consumers like fans and circulation pumps. This is the value which has to be taken into account when specifying the TEWI; such a figure is too complicated for a politician and for an environmentalist. But this figure is the basis for the right selection of the whole system (Halozan 2002).

3. POSSIBLE FUTURE DEVELOPMENT
The future development will be characterised by the improvement of components, probably other refrigerants, and advanced systems.
3.1. Technological development
In the small to medium capacity range the reciprocating compressor has been replaced by the rotary compressor and the scroll compressor. A new development are small centrifugal compressors with high-speed drives and magnetic bearings for oil-free operation Liquid/refrigerant heat exchangers have changed to welded flat plate heat exchangers. Ground-coupled heating-only heat pumps, especially direct-exchange ground source systems, have increased SPFs to 4 and lately up to 5. Besides better components improved building codes reducing supply temperatures required to values below 35°C are responsible for this development. For larger systems for both heating and cooling the ground is used as a store. Additionally low-ex systems can contribute for increasing the system efficiency significantly.
3.2. Refrigerants
The old refrigerants (working fluids) from up to the 1930s were ammonia, carbon dioxide and other fluids, most commonly toxic and/or flammable; later on the “safety refrigerants” (chlorofluorocarbons, CFCs, and hydrochlorofluorocarbons, HCFCs) quickly occupied the market, the old refrigerants disappeared. The only exception was ammonia, it was and still is in use for large applications.
This situation remained so until the Vienna Convention (1986) and the Agreement of Montreal (1997): the future production of CFCs was limited and in the end essentially banned, for reasons of destroying the stratospheric ozone layer. A few years later (Kopenhagen, 1992) also an agreement for limiting the HCFCs was concluded. A next step under consideration is phasing out the hydrofluorocarbons, HFCs, like R-134a, R-407C, R-404A, and R-410A due to their global warming potential. Alternatives would be the old refrigerants ammonia (R-717), the hydrocarbons propane (R-290), propylene (R-1270), and isobutane (R-600a), CO2 (R-744) and water (R-718). Ammonia and the hydrocarbons do not match the requirements of a “safety” refri¬gerant caused by toxicity and/or flammability; water and CO2 keep it (Halozan, Rieberer 2006).

Ammonia – R-717
The technology used for ammonia systems is different from the technology used in systems with fluoro¬carbons: For large systems this is not a serious problem. The real problem are medium sized and small applications, where ammonia is in competition with direct evaporation/condensation systems. Developments are reducing the refrigerant charge of the systems (0.1 to 0.05 kg/kW heating capacity), the development of 40 and 60 bar compressors as well as the development of hermetic compressors.
Propane – R-290
Compared with existing units using R-22 as refrigerant, only a few changes have to be made to adapt a unit for the operation with propane, to improve the performance of the unit an internal heat exchanger has to be added, and the COP of the unit becomes significantly higher. Furthermore, the condensing temperature can be increased from 57C of a R-22 unit to 65C of the propane unit.

CO2 – R-744
Presently CO2 is being used as heat carrier in commercial secondary loop systems. But with CO2 it is also possible to realise again direct evaporation systems by using it as refrigerant in the low-temperature stage of a refrigeration cascade. For applications with condensing temperatures exceeding 30°C the trans-critical cycle with pressures up to 140 bar has to be used. Highly efficient solutions using CO2 are hot water heaters, air heating systems and exhaust air heat recovery systems being the only heating/cooling devices for ultra low-energy houses (Halozan, Rieberer 2006).
H2O – R-718
Water has been and is being used successfully in MVR systems; but nowadays it is also used for chillers where the water is both refrigerant and heat carrier. Due to the low volumetric cooling capacity centrifugals have to be used, and the smallest capacity presently realised in prototype installations is about 800 kW.

3.3. Systems
The most important item is the development of systems. The interaction of the user, the building, the heating/cooling equipment and the control has to be considered very carefully, and only such a system approach can achieve highly efficient systems. Free cooling, direct cooling and shifting heat from one side of the building to the other side have top be criteria for the design of the system(Fig.2). 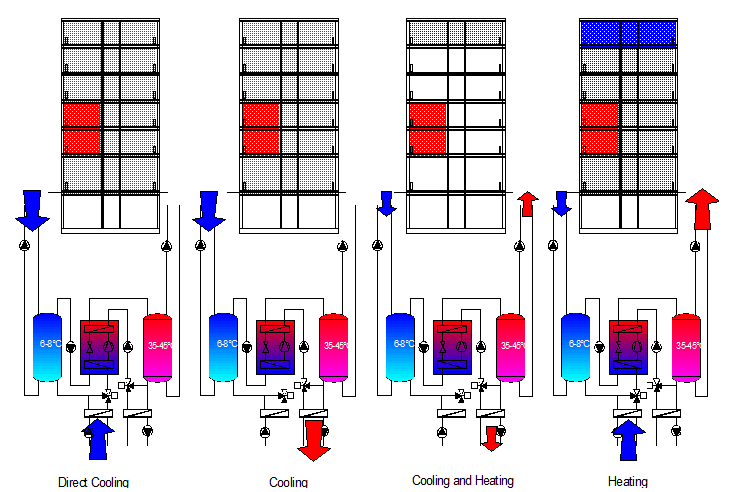 4. CONCLUSIONS
Heat pumps are an old technology, which has not been extensively used as long as both energy prices and the efficiency of electricity generation have been low. The oil crises have changed this situation, and now Kyoto and the climate change, respectively, are a further reason for the increasing market deployment of this technology.
The potential for reducing CO2 emissions assuming a 30% share of heat pumps in the building sector using technology presently available is about 6 % of the total world-wide CO2 emission. With advanced future technologies in power generation, in heat pumps and in integrated control strategies up to 16 % seem to be possible. That makes heat pumps to one of the key technologies for both energy conservation and reducing CO2 emissions (Gilli, Halozan, 2001).