Refrigeration, including air conditioning, is necessary for life and will continue to expand worldwide. Its impact on environment is huge, even if refrigeration technologies can also be part of solutions for mitigating global warming (new sources of energy, heat pumps…). Many efforts have already been made. However, reduction in CO2 emissions and fluorinated gas emissions are challenges to be addressed on an ongoing basis.

Refrigeration is necessary for mankind

Temperature is a magnitude and a key variable in physics, chemistry and biology, and characterizes the state of matter and liquid, solid and gaseous phases, which is vital to all living beings. Thus, thanks to research and development for almost 200 years, refrigeration technologies have progressively led to the providing of goods and the setting up of services vital to mankind: 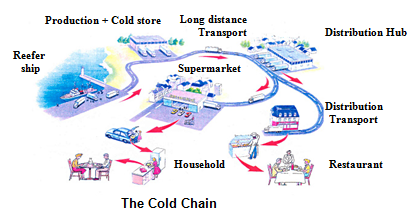 Moreover, these applications will continue to expand not only because they are needed for our whole current way of life (e.g. air conditioning for data centres and computer technology…) but also because they are necessary for life itself. Needs in terms of health will dramatically increase:
– according to the FAO1, about 1 billion people are undernourished.
The population is predicted to rise from about 7 billion now to probably a little more than 9 billion people in 2050.2 The global food energy intake per person is increasing too. The global food supply must increase considerably in order to achieve global food security in an equitable manner. The most commonly cited solutions in order to raise production are: i) expansion of the quantity of arable land; ii) higher crop frequency (often through irrigation); and iii) increased crop yields thanks to improved agricultural production technology. The lack of arable land along with limited water resources in many parts of the world is likely to hamper the first two solutions. Therefore, increasing agricultural production alone may prove insufficient to address food security and safety. Greater emphasis on a holistic solution, that encompasses the reduction of post-harvest losses, is an additional sustainable way of increasing food availability. Greater use of refrigeration technologies would ensure better worldwide nutrition, in terms of both quantity and quality. Foodstuffs of animal and plant origin are highly perishable and can host pathogens. Significant causes of food borne diseases and spoilage are bacterial contamination, survival and growth. The use of refrigeration substantially reduces bacterial growth in foods. A study3 indicates that annually, an estimated 1777 people die every year from known pathogens, out of a total of 5000 deaths from all foodborne diseases in the USA. Analysis of data on causes of foodborne illnesses suggests that over 90% of these illnesses are at least partly associated with poor temperature control. Global food production comprises roughly one third of perishable products requiring preservation. In 2003, out of a total global food production (agricultural products, fish, meat products and dairy products) of 5500 million tonnes, it was estimated that only 400 million tonnes were preserved thanks to refrigeration (chilled or frozen), whilst at least 1800 million tonnes required refrigeration.4 This results in huge losses.

– the population, both in developed and in most developing countries, will become older, more urban and will need better food safety and moreover more health care and products, more air conditioning… and thus more refrigeration equipment.

The huge development which is forecast must be sustainable.

Refrigeration and air conditioning have an important impact on the environment

On the stratospheric ozone layer More than 90% of refrigeration equipment relies on vapour compression using refrigerants and this figure will not change in the near future: other technologies do not generally have enough efficiency. Chlorinated refrigerants (chlorofluorocarbons – CFCs, and to a lesser extent, hydrochlorofluorocarbons – HCFCs) contribute to the depletion of stratospheric ozone if released into the atmosphere due to equipment leaks or if refrigerants are not properly recovered when disposal of the equipment takes place.

CFCs and HCFCs are gradually being phased out thanks to the Montreal Protocol. Current measurements of the ozone layer show overall stability and probable recovery to the previous level around 2060. They are often replaced by hydrofluorocarbons (HFCs) which do not deplete the ozone layer but are potent greenhouse gases, as are HCFCs, when released into the atmosphere. CFCs were also greenhouse gases and their global warming potential was much higher. The impact of the Montreal Protocol is thus also positive regarding global warming. However, it is not enough.

Refrigeration and air conditioning have an impact on global warming in three ways:
– release into the atmosphere of CFCs, HCFCs and HFCs. The contribution of these refrigerants represents between 1-2% of greenhouse gas emissions. It has been reduced considerably since 1987 (signature of the Montreal Protocol) (cf. the following graph) 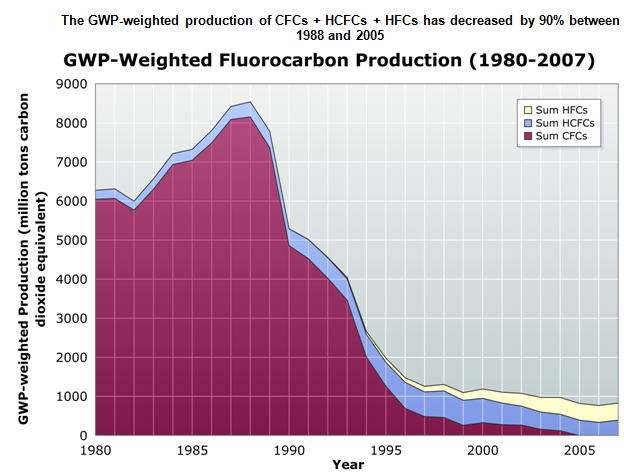 1. Calculated from production reported to AFEAS with global warming potentials for a 100-year time horizon from the Scientific Assessment of Ozone Depletion: 2006 (which contains a homogeneous set of GWP values). [Note: The Kyoto Protocol is based on actual emissions, not production.]

2. CFC production was not reported to AFEAS in 2005, 2006 and 2007
However, the impact of refrigeration and air conditioning on global warming is likely to increase again because of the huge increase in refrigeration equipment uses and thus of HFCs taking place now.

– the energy consumption of the equipment. It represents about 15% of worldwide electricity use and this percentage is even higher (more than 20%) in some developed countries. Electricity is generally produced thanks to fossil fuels (coal, oil, gas) in most countries. Electricity consumption thus represents the major impact of refrigeration equipment on global warming. There are several solutions: improving the coefficient of performance of refrigeration equipment, thus reducing the electricity consumption per unit; building more integrated and controlled systems of energy consumption in a whole building (heating, cooling, lighting…), in a whole district, in a transport system …; using renewable energy for producing refrigeration or air conditioning, especially solar cooling. Of course, reducing the fossil fuel component of electricity production, thanks to nuclear energy, hydropower, biomass, wind and solar energy… would mitigate this huge impact.

– Conversely, refrigeration can be a solution for reducing sources of global warming. For instance, heat pump technology embodies refrigeration equipment either used for heating, or used for both heating (in winter..) and cooling (in summer..) – reversible heat pumps. This source of energy for heating uses electricity but its impact on global warming is much lower than traditional means of heating; it is thus considered as renewable technology per se under certain conditions in the European Union and its market is expanding very rapidly, particularly in Europe and Japan.
Refrigeration is also needed for liquefaction of gases, providing new sources of energy: liquefied natural gas (natural gas is a greenhouse gas, but exerts less impact than fuel produced by coal and oil); liquefied hydrogen (an energy of the future?). New sources of cooling (expanding the cooling effect of liquefied nitrogen or liquefied CO2…) can be more efficient in certain applications than traditional vapour-compression systems; experiments in refrigerated transport are currently being performed in Europe and in the USA. New solutions for mitigating global warming also need refrigeration technologies (capture and storage of CO2…)

As explained above, these direct emissions have been reduced considerably since 1987. However, we need to act in order to avoid a new increase:

– Reducing leakage through design, proper maintenance, training and certification of technicians and plants. This is the aim for instance of the F-gas regulation in the European Union which will soon be reviewed. Even before that regulation, the leakage rate, which was about 30% in the 1980s is now (on the average) about 5 – 10%; 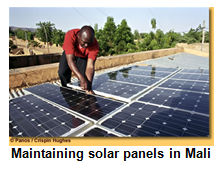 However, all these solutions must be energy efficient. All technical solutions must take into account both direct and indirect effects on global warming (TEWI) under similar conditions (exterior temperature…).

The coefficient of performance (COP) of refrigeration systems has already been improved. For instance, in commercial refrigeration, it was about 2.5 in 1960 and it is now about 4; new refrigerators used four times less energy in 2008 than 35 years ago. The IIR5 estimates that a reduction in the energy consumption of refrigeration plants by 20% by 2020 is still perfectly possible.
General policies, such as energy labelling can help: such policy already exists for domestic refrigerators in many countries for instance. Average energy savings of 15% have been achieved in new refrigerators within a few years in these countries.5 It could be applied to other kinds of equipment, provided that we agree on the system to be labelled (e.g. transport refrigeration: shall we consider only the refrigeration equipment or the whole vehicle, comprising insulation, motorization…?) Insulation must also be improved. This is obvious for buildings. Many incentive measures have already been taken in order to encourage people to better insulate houses, apartments… However, this can also be achieved in refrigerated transport and in commercial refrigeration. For instance, the design of display cabinets (ways to open during the day, covered at night…) are a major source of energy savings. New technologies, such as phase- change materials, can improve insulation in buildings. General policies on energy production and uses certainly have huge impacts on the energy consumption of refrigeration equipment: integrated systems, trigeneration (heating, cooling, electricity production) in a whole system, use of renewables in electricity production. 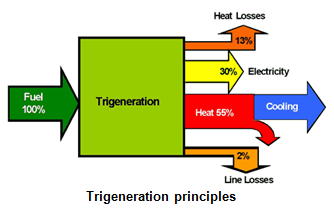 Refrigeration equipment must be adapted to the global warming challenge. It needs long-term policy. The current phase-out of HCFCs, even if it requires a huge effort on the part of the refrigeration sector, provides an opportunity to design new equipment using renewables as energy sources and using technologies with good energy efficiency. Existing equipment can and must be improved. However, the progressive renewal, within about 20 years (lifespan of equipment) on the average, of refrigeration and air–conditioning equipment, using environmentally friendly technologies, is a key factor and could represent a major part of worldwide efforts for mitigating global warming until 2030.