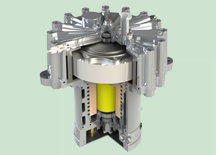 Increasing penetration of renewables is creating supply and demand balancing problems across all timescales. This penetration, initially encouraged by government subsidies, is accelerating due to substantial cost reductions in solar voltaic and wind in particular. These balancing timescales range all the way from milliseconds affecting grid stability to hourly, daily and seasonal. Large coal fired steam engines possess stored energy in their rotating equipment which helps keep the AC frequency stable plus such engines could operate according to demand. Their removal from the system and replacement by renewable sources requires storage in order to maintain grid system stability and matching of supply and demand.

Large Lithium Ion batteries are now being installed in order to provide storage both for grid stability and daily demand-supply matching. Although this technology is able to provide relief to the problem, it has a number of drawbacks, the most serious of this is degradation and limited life. Lithium Ion batteries are not a single technology but represent a spectrum of different chemistries and system designs including the cooling system. Performance and cost vary considerably but a typical cell life will be maximum 10 years due to aging and likely half or a third of this if they are required to provide a number of cycles per day of significant discharge. For grid applications, cells are usually operated between 80% to 40% depth of discharge which means the usable capacity is 40% of the nominal. The cost of the cells has reduced dramatically in recent years but recycling is yet to be established and this is not very easy. There are plans to use second life electric vehicle automotive batteries for the grid but this only delays the problem of disposal and a spent automotive batteries will not have much calendar or cycle life left in any case. The demands on grid level storage will be increasing over time meaning more capacity is needed and these will be called upon more frequency so robust solutions are needed as well as those offering lowest lifetime cost.

There are other established methods of storing energy based on mechanical systems, the largest by far is the pumped hydro system, currently dominating world energy storage capacity. Such systems are limited by geographical location. There are other ways such as compressed or liquid air which are more flexible and these can be combined with thermal storage to increase overall efficiency. All these systems can be designed to last for decades more in line with traditional grid scale electricity equipment. However, they all suffer a major weakness of slow response time. If this is mitigated by hybridising with a fast, short duration storage system, all timescales of storage can be covered, certainly from mS to daily ranges. 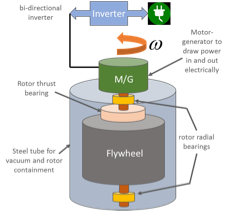 It is proposed that flywheels offer an attractive solution for this fast response application. A flywheel, which stores energy in rotational momentum can be operated as an electrical storage by incorporating a direct drive motor-generator (M/G) as shown in Figure 1. The power to and from the M/G is transferred to the grid via inverter power electronics in a similar way to a battery or any other non-synchronous device. In order to keep the size of the M/G reasonable, the flywheel is operated between a minimum and maximum speed and would be kept spinning by means of a small input power to make up for the parasitic losses. The minimum speed of the flywheel is typically half its full speed, the storage energy is be given by ½ (12-0.52) Iff2 where If is the rotor moment of inertia in kgm2 and the f maximum rotational speed in rad/s. The power level is controlled by the size of the M/G so this is independent of the rotor. In this way, very high powers are possible with a relatively small flywheel sufficient for a few 10’s seconds or minutes. Parasitic losses occurring due to aerodynamic drag or windage can be almost eliminated by use of a sealed casing which holds the required vacuum. Bearings will create a drag loss but can be minimised by levitating the rotor using a permanent magnet passive magnetic axial bearing. Low loss mechanical bearings or active magnetic bearing may be used as radial bearing to keep the rotor stable. A further loss may be developed in the M/G but this can be reduced by careful design choices. Depending on the design particulars, the input power to sustain the rotor at speed can be low and similar to auxiliaries needed to cool or heat batteries. Given their robustness, flywheels typically can operate at any ambient temperature with some air or water cooling of the M/G and power electronics when power is drawn. 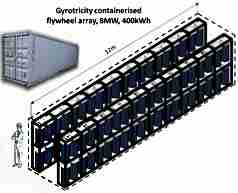 The key technology in any flywheel is the rotor. Initially flywheels were made of solid metallic steel either run at low enough speed to ensure burst would never occur or substantial containment was provided in the case that higher speeds were used. There are examples of these designs in operation today with much recent activity. There was a flurry of interest in use of carbon fibre composites for flywheels starting from the 1980s. This material has a specific strength (strength/density) of around 10 times that of steel in direct tension so it appeared to be vastly superior as a flywheel material offering a breakthrough.

Since the material has its strength in one direction and material properties vary, carbon composite flywheels more typically have a rotor weight of around 3-4 times less than solid steel but the overall volume of the rotor is around twice. Still a substantial advantage for transport applications but for the cost. However, in more recent years it was found that composite flywheels could fail in an explosive mode which created very high pressures with the containment. This can be contained albeit with very thick containment, composite containment or by burying the flywheel in an underground bunker. This issue severely detracts from the lightweight rotor when the whole system weight and size are considered. Another approach is to laminate a steel rotor such that in the event of a failure, only a small part of the rotor is released. This allows the casing to be thinner and yet maintain safety so such flywheels can be above ground or in buildings without additional safety measures. Steel is fully recyclable so even after decade of operation, use of this material is highly sustainable.

Although any individual flywheel may be small relatively to grid requirements, any power level can be achieved for flywheels since modules are simply multiplexed in the same way as grid scale battery consists of many cells and strings. Figure 2 shows a layout of an 8MW array that can be fitted inside a 40 foot container as an example.