ABSTRACT
This paper presents the development of the upper cycle pressure control system of a CO2 tap water heat pump. The system is designed to satisfy the domestic hot water requirement of a residential building located in the northern part of Italy. The heat pump works according to a single-stage transcritical cycle with internal heat exchanger.

The basic design consists of a single-stage piston compressor, a co-axial gas cooler, an electronic expansion valve, a finned tube evaporator and a low pressure receiver. The heat pump is combined with a storage tank where stratification is preserved. The water mass flow rate is modulated by a PID controller so as to reach and maintain the outlet water temperature at the set-point value. The task of the control logic is to find out the couple of variables, water flow rate and gas cooler pressure, that result in the best COP, under the constraint of fixed water temperature at the gas cooler outlet. An experimental prototype was factory tested to verify its energy performance and to validate the high pressure control logic.

Carbon dioxide operating according to a transcritical cycle is regarded as an energy efficient option for tap water heat pumps: the gas cooling process well fits the warming up of a finite stream of water, resulting in a quite large temperature lift in water without significant penalisation in COP, as it was clearly demonstrated in the technical literature [1-3]. The peculiarities of the transcritical cycle require the use of once-through gas coolers in association with storage tanks where water keeps stratification, without mixing between the entering cold water from the town waterworks and the hot water delivered to users; only by this way the lowest refrigerant temperature can be achieved at the gas cooler outlet, leading this system to work in the best working conditions [3-5]. The aim of the heat pump is to provide the storage tank with tap water at the required temperature in the most energy efficient way. As it is well known, unlike the common subcritical cycle, the transcritical cycle need to find the optimal value of the cycle upper pressure, that is the one which leads to the maximum COP. This system must be endowed with an on board unit control which operate on the flow factor of the expansion valve leading the machine to work at the optimal gas cooler pressure. As previously mentioned, neither recirculation nor water mixing is planned in the water storage tank; as a consequence the gas cooler outlet water temperature must be carefully controlled. For this reason, the water mass flow rate is modulated by a PID controller so as to reach and maintain the outlet water temperature at the set-point value; therefore, the mass flow rate is intrinsically variable and linked to heat flow rejected at the gas cooler. The task of the control logic is to find out the couple of variables, water flow rate and gas cooler pressure, that result in the best COP, under the constraint of fixed water temperature at the gas cooler outlet. Severeal Authors [6-8] faced up the optimization problem of a transcritical system upper pressure. They analysed a single-stage refrigerating cycle working with internal heat exchanger. By mean of different simplifying assumption, the same Authors theoretically worked out expressions to define the optimal cycle upper pressure as a function of the refrigerating cycle variables, which are mainly the gas cooler refrigerant outlet temperature and the evaporating temperature. As a consequence of a fixed outlet temperature, the system works in a wide range of water mass flow rate and may requires to include this variable in the correlations for the optimal cycle upper pressure. This method leads to a very heavy experimental campaign in order to define the system performance in different working conditions. Otherwise, a very accurate numerical study is needed to predict the performance of each component of the heat pump, to find out the performance of a virtual prototype. A new mothod, presented in this paper, is related to the use of a mathematical model of the thermodynamic cycle to estimate the heat pump COP and to find out the optimal heat rejection pressure, on the basis of few inputs: discharge pressures, gas cooler outlet temperature and evaporation temperature. This allows saving in time development, because it doesn’t require the experimental based polynomials of the optimal upper cycle pressure.

SYSTEM DESIGN
The system is designed to satisfly the domestic hot water requirement of a residential building. The building’s estimated hot water consumption is 6 m3/day of water at 60°C. The basic circuit of the heat pump and the water circuit which was set up in the factory for testing purpose are represented in Figure 1a. The main characteristics of the heat pump are summarised in Table 1. The heat pump and the water circuit were equipped with temperature and pressure sensors located as shown in Figure 1a. Copper-constantan thermocouples (T type) were used as temperature sensors. The estimated accuracy of the entire temperature measurement system is 1.5°C. Pressures were measured at the suction and discharge sides of the compressor. Two pressure sensors (Huba Control OEM relative pressure transmitters) were used, with the following measuring ranges: 0-160 bar (discharge pressure) and 0-60 bar (suction pressure). 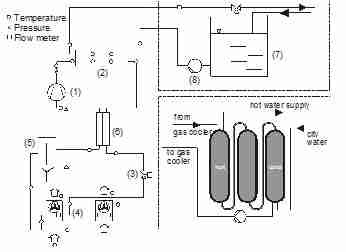 Figure 1a. Heat pump and water circuit. Figure 1b. Water circuit for the utilisation

The accuracy of the pressure transducers is 0.5% FS. The water flow rate was manually measured by means of a domestic water meter for ten minutes with an average accuracy of ±0.02 m3 h-1. 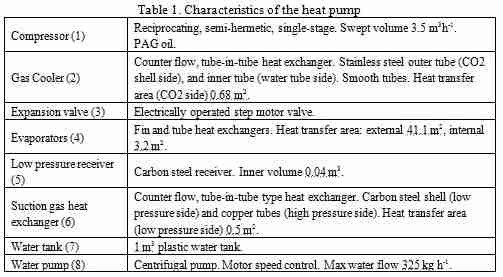 The control logic which was developed manages simultaneously the water flow rate and the gas cooler pressure by acting on the pump (8) and on expansion valve (3). The water mass flow is modulated by a PID controller so as to reach and maintain the outlet water temperature at the set-point value; the controlled variable is compared with the set-point value and the pump speed is varied in order to minimise the error. At the same time, the control logic uses a mathematical model of the heat pump thermodynamic cycle to estimate the heat pump COP on the basis of few inputs: discharge pressures, gas cooler outlet temperature and evaporation temperature. To obtain the maximum COP, the upper cycle pressure is controlled using an adaptive logic; periodically this pressure is slightly modified and the effect on COP is evaluated by the thermodynamic model; then the upper pressure is further adjusted according to the COP trend. The mathematical model is obtained through thermodynamic simulation of a single-stage compression cycle with set values of pressure and vapour superheating at the compressor inlet, for different pressures and temperatures of the refrigerant at the gas cooler outlet. A constant value of 0.7 was assumed for the overall isentropic compression efficiency, and superheating was fixed at 20°C. A ten coefficient polynomial expressing the COP as a function of gas cooler pressure and gas cooler outlet temperature was used. Simulations were performed at several evaporating temperatures, so that each coefficient of the polynomials was expressed as a function of the evaporating temperature. Each of these coefficients was expressed as a polynomial of variable order (from second to fourth). The polynomial’s shape is given below:

EXPERIMENTAL RESULTS
The mathematical model used to estimate the COP, is based on two different polynomials developed to interpolate the thermodynamic cycle data in a wide range of values. The validity limits of the interpolation relations are reported in Table 2. The resulting polynomials were able to predict the COP within ±25%. Nevertheless, is not important the real deviation between the predicted and the real COP, but it is essential to have similar curves shape concerning the location of the maximum COP. The largest errors occur when the system is operating close to the operative limits of the inverse cycle, i.e. low values in gas cooler pressure and high values in gas cooler outlet temperature.

Tests were performed, being nearly constant the air ambient temperature and the inlet temperature of water, respectively at about 22°C and at about 20°C; the set-point of the water temperature at gas cooler outlet was varied from 60°C to 70°C by repeated steps of 5°C. As shown by the data reported in Table 3, the response of the system was always satisfactory; at the same time the water flow rate forced by the pump was properly modulated to reach the new value of the set-point and the upper pressure of the cycle was modified in order to maximise the COP. The variation in terms of gas cooler power is reflected in the evaporating temperature, being also affected by the air temperature.The transition from the old to the new operating conditions was rather fast and only a very moderate hunting in the controlled variables can be observed during the stabilised period following the initial instability; as an example, in the diagram of Figure 2 a typical response of the system to a variation of the set-point is shown. The ability of the system in promoting the maximum COP of the cycle was not definitely verified, but the value reported in Table 3 are consistent with the search for the optimisation of the operating conditions. The values of the experimental COP are defined as the ones calculated from the performance of the compressor in correspondence of the actual operating conditions.