Energy storage is an important element in the efficient utilisation of renewable energy sources  and in the penetration of renewable energy into electricity grids. Compressed air energy storage (CAES), amongst the various energy storage technologies which have been proposed, can play a significant role in the difficult task of storing electrical energy affordably at large scales and over long time periods (relative, say, to most battery technologies). CAES is in many ways like pumped hydroelectric storage (PHS), which has the largest worldwide installed capacity, quoted as 130 GW by Perez-Diaz et al. (2015) . In PHS, water is pumped to an elevated storage reservoir when excess electricity is available, and then allowed to flow downwards by gravity and through turbine generators when electrical power is required. For very large power capacities, PHS requires large natural-land features to hold the water, whereas CAES requires large underground sealable caverns which can hold high-pressure air.

Even though in the above respects the two technologies are somewhat similar, unlike the pumping of water, the compression of air generates a substantial amount of heat which, unless captured and integrated into the overall process, can cause significant efficiency losses. Glendenning (1976)  and (1981)  examined the prospects of the long-term use of CAES and noted that ‘storing all the compression energy’, i.e., including the excess heat (he suggested, for example) by means of pebble-bed heat storage, is of particular importance to the overall performance of this technology.

A major CAES plant in Huntorf (Germany)  has been in operation since 1978. This plant has an electrical power storage rating of 300 MW, and can supply this electrical power over 3 hours leading to an energy storage capacity of 900 MWh. The plant has a charge time of 12 hours. When discharging it can produce power equivalent to almost 40 wind turbines rated at 8 MW. Interestingly, this plant has operated for most of that time using natural gas to boost the energy output from the stored air by heating it before it enters the turbine system, with an overall electrical-to-electrical (or “round-trip”) storage efficiency of about 42%. Recent modifications to the plant, specifically by saving compression energy, have reduced the demand for extra energy from natural gas and led to a 25% improvement in efficiency, which is now similar to the other major CAES plant in operation in McIntosh (USA).

The concept of using a liquid to compress a gas is not new and goes as far back as a patent by Christensen (1933) , who presented a method aimed at achieving a compression process during which the temperature remains approximately constant, which saves energy. That concept has recently been resurrected in a patent by Hunter (2017) . In the latter, water is pumped into a sealed chamber containing the air which is then compressed, the heat of compression is removed, and then released at pressure into an above-ground storage vessel. Several of these pumped compression steps are needed to generate sufficient compressed air to provide a useful energy storage, following which, energy is stored both as pressure in high-pressure air and as heat in hot water.

One version of such a liquid-compression solution is shown in Figure 1 below: 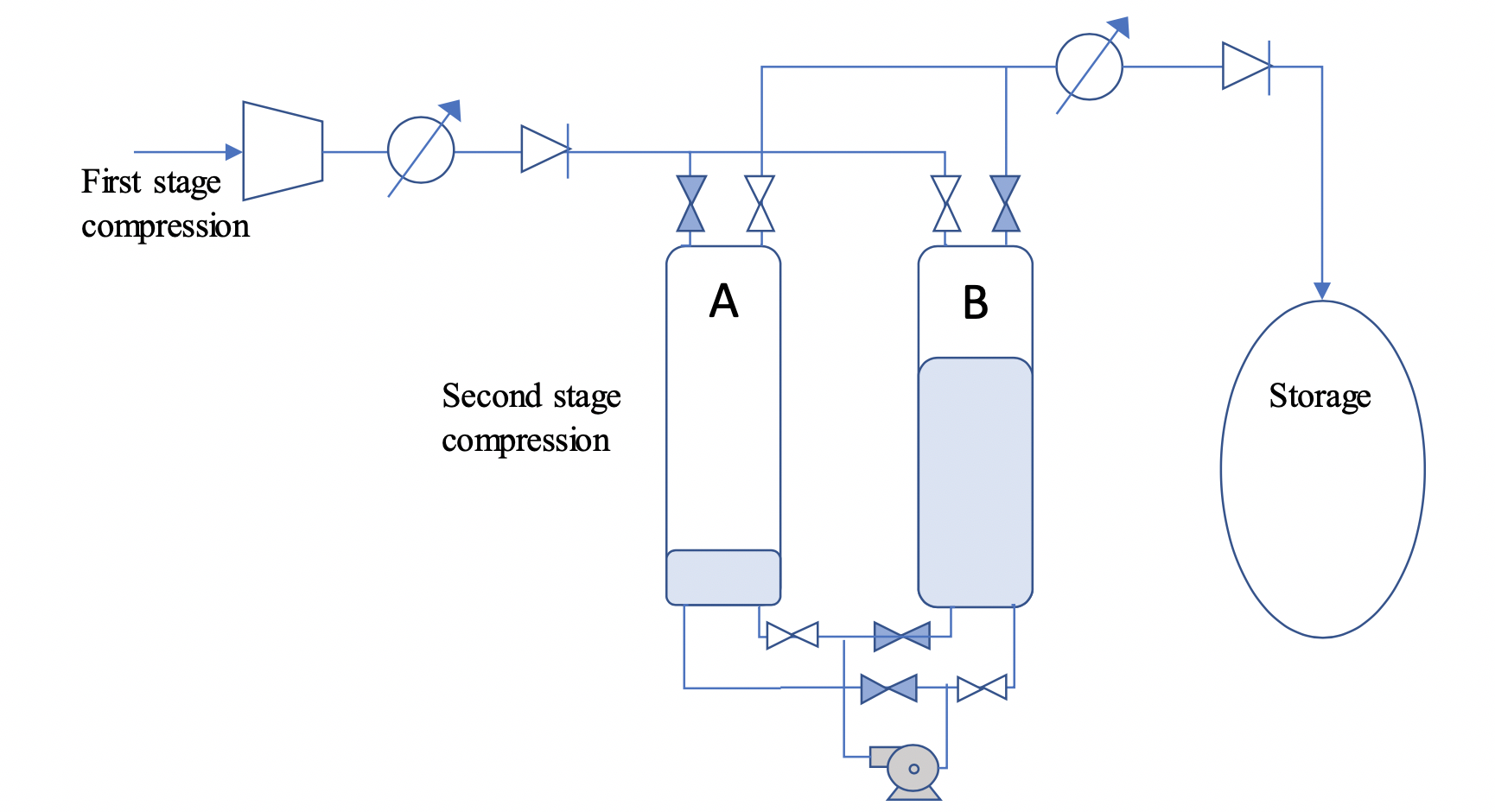 Figure 1: Schematic of a form of liquid-piston compression within a CAES system.

In the solution in Figure 1, the water used for compression – a ‘liquid piston’ – is pumped from Tank A to Tank B and back again, thus accumulating heat in a closed-cycle hot-water circuit. The design challenge here is to transfer heat into the water at the same time as compressing the air; referred to as ‘heat integration’. The quantity of water used in the closed-circuit section is selected so as to produce the correct temperature for the subsequent process – the smaller the mass, the hotter the water. Because of the high pressures required for air storage, the hot water is kept below its boiling point.

The novel features of the scheme above arise in the design of the vessel internals, which enhance the heat transfer between the water and the compressed air. The precise mechanism of generating interfacial area and thereby of maximising the internal heat transfer is the subject of on-going research, although a number of methods have been mooted in the literature albeit not in a ‘finished’, commercial form. The heat transfer methodology and the vessel geometry, which are closely related, are currently subject to a research programme designed to examine the compression-chamber design and operation, heat transfer optimisation issues, overall hardware design, and wider system integration. With the exception of (the internals of) Tanks A and B, another important feature of such a solution would be its ability to be constructed from off-the-shelf components and equipment, thereby minimising cost.

CAES systems based on liquid-piston approaches, including heat-integration, lend themselves very well to electricity storage with power capacities of a few MW generating for a few hours – equivalent to the demand of a few thousand homes. In this case, the high-pressure air storage vessels can be conventional steel vessels, and can be small enough to be containerised, along with the rest of the system. Thus, the whole plant can be independent of the need for natural caverns for air storage and can be readily moved close to sustainable energy sources, e.g., wind power, or wherever it is needed.

The huge drive to satisfy the present and growing demand for electricity in different global regions requires technologies that facilitate the utilisation of intermittent renewable sources. While some larger projects such as the Gibe III dam in Ethiopia  (1,870 MW, equivalent to the entire generating power of Kenya) will continue to be required as part of the solution to the energy challenge, smaller-scale, distributed power-generation and energy-storage facilities will also be required to fulfil other demands, especially where large and particular geographical features are not present. Next-generation concepts such as the one presented here, have an important role to play in addressing this challenge.

Christos Markides is a Professor of Clean Energy Technologies and Head of the Clean Energy Processes (CEP) Laboratory at Imperial College London. He specialises in thermodynamics and enhanced fluid flow/heat transfer processes as applied to a range of components, devices, technologies and systems for thermal energy (solar, renewable, waste-heat) collection, recovery, conversion and storage. He is an Executive Editor of Applied Thermal Engineering, a Subject Editor of Renewable Energy, an Associate Editor of Multiphase Science and Technology, is on the Editorial Board of Energy and Frontiers in Solar Energy, and is a member of the Scientific Panel of the Knowledge Center on Organic Rankine Cycle technology, the UK National Heat Transfer Committee, and the Scientific Board of the UK Energy Storage SUPERGEN Hub. He won IMechE’s Donald J. Groen outstanding paper prize in 2016, ‘Most highly cited original paper’ awards from Applied Energy in 2017 and 2018, and received the Imperial College President’s Award for Research Excellence in 2017.

Ray Sacks is currently studying for a PhD in Compressed Air Energy Storage (CAES) in the Clean Energy Processes (CEP) Laboratory at Imperial College London. He formerly worked in the cryogenic industry for many years, ultimately specialising in distillation column research and design. He worked on the design of equipment, such as large adsorption vessels, critical gas-mixing hardware and large cooling water pumping inlet-basins. At the company’s first fully computer-controlled plant, he acted as design technical engineer, program developer and on-site start-up engineer. He was later involved with control schemes for large air separation plant, and worked to help develop the company’s expertise in acoustics in response to the increasing legal and health demands in that discipline. He was a member of the HTFS Compact Heat Exchanger Panel, is currently a member of the Institution of Chemical Engineer’s Clean Energy Committee, is Fellow of the Institution of Chemical Engineers, a Member of the Institute of Acoustics and a Chartered Engineer.