ABSTRACT
Carbon dioxide (R744 – CO2) is nowadays considered one of the most attractive long term solutions for commercial and industrial refrigeration applications, as well as for hot water heat pumps. This refrigerant thermodynamic characteristics lead to somewhat high discharge temperatures (up to 200°C), this having a significant impact on both oil temperature, thus affecting its lubricity, and refrigerant suction temperature and density, thus affecting compressor volumetric and isentropic efficiency. Therefore, improving discharge gas heat rejection it is possible to increase both compressor reliability and efficiency.

This work is aiming to offer a qualitative analysis of how different design concepts impact on compressor heat transfer and dissipation, leading to diverse performances both in terms of reliability and efficiency.

1. INTRODUCTION
The use of carbon dioxide (R744 – CO2) is nowadays considered one of the most attractive long-term solutions for various applications, like commercial and industrial refrigeration, air-conditioning systems and hot water production, not only because it is a natural refrigerant but also because it often leads to energy efficiency gain when compared to standard installations.

However, specific components shall be used, especially when the system works in trans-critical conditions; CO2 systems are to date quite popular and this made dedicated components fully available, featuring same reliability and efficiency rating to equivalent HFC components.

The compressor, as the sole system moving part, represents one of the most critical component to be designed for such applications: several challenges have to be faced and solved, mainly linked to this refrigerant thermodynamic characteristics. Bearing in mind all these critical aspects, a new generation of CO2 trans-critical compressors has been developed, with displacements ranging from 1.1 m3/h to 26.6 m3/h and motor power ranging from 1.5 hp to 40 hp. Several design of experiments were evaluated and the main results are hereby summarised and described.

2. THE NEW COMPRESSORS RANGES
The newly developed compressor ranges (CD200, CD300, CD400) offer the largest choice in terms of available models, making it possible to realize installations of any size, from residential to commercial and industrial ones. Compressors are developed in semi-hermetic platforms with 2 and 4 cylinders and 4 poles motors; the various displacements are obtained by changing bore and stroke. Compressors are able to operate in a very broaden application envelope, with working pressures up to 150 bar; qualification life testing highlighted how robust the compressors are, being tolerant to work with differential pressures up to 120 bar and 200°C discharge temperatures.

3. LABORATORY
The laboratory layout is shown in figure 1. 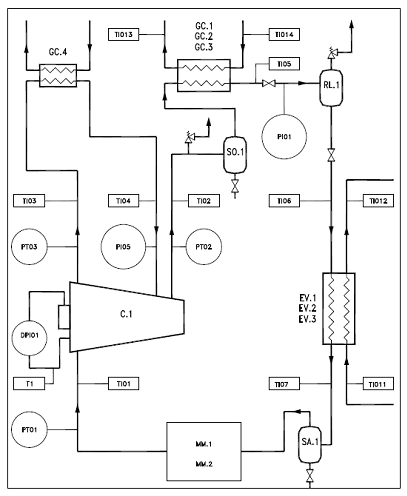 Figure 1: Laboratory layout
The compressor subject of this paper is model CD1900H, 11.62 m3/h, 20 hp. It has been thoroughly tested in various concepts, being equipped with pressure and temperature sensors to monitor its behaviour and performances.

A 68 cSt nominal viscosity oil (PAG) has been used as the lubricant.

4. DESIGN OF EXPERIMENTS
Due to the very high end of compression temperature, particular focus has been given to the heat rejection at the high pressure side of the compressor; 2 main design of experiments (A and B) were realized and tested, and are shown in figure 2 and figure 3. 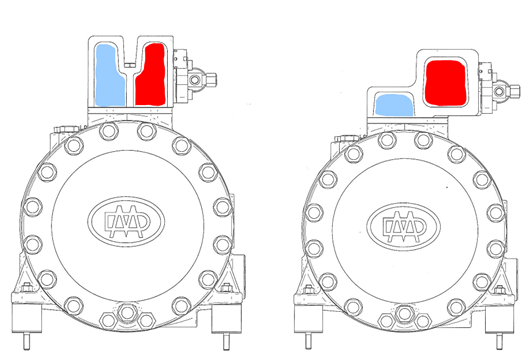 5. EXPERIMENTAL RESULTS
Experimental results are summarised and shown in figures 4 and 5. 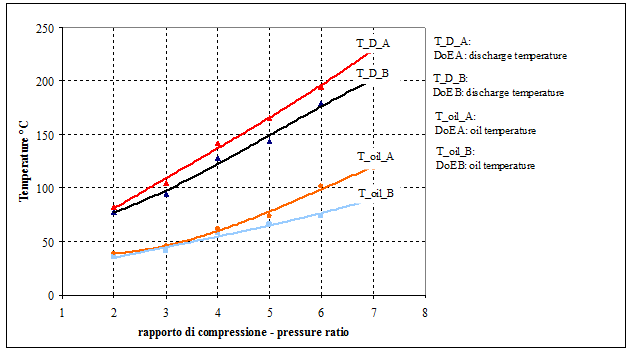 Figure 4: Discharge and oil temperatures for Design of Experiment A and B 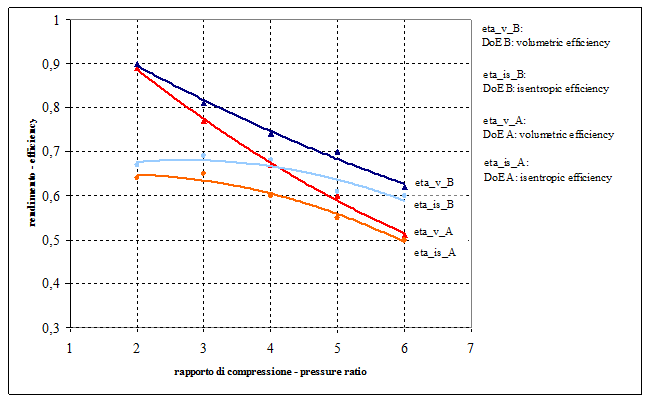 Figure 5: Volumetric and Isentropic efficiencies for Design of Experiments A and B

Figure 4 highlights important aspects relating to compressor reliability; in fact, design of experiment B brings to a consistent reduction of both end of compression and lubricant temperatures thanks to the aforementioned thermal heat dissipation. Therefore, design of experiment B is preferable as it leads to several advantages, for instance:

6. CONCLUSIONS
This paper describes the experimental analysis conducted on 2 trans-critical carbon dioxide compressors.
The two concepts have been tested in equivalent rating conditions and the main operational parameters were recorded and analyzed. As predicted, consistent benefits are arising from the enhancement of the heat dissipation from the compressor high pressure side to the surrounding ambient, both in terms of reliability and performances.
A new trans-critical CO2 compressor generation is nowadays available for many kind of applications, featuring the technical advantages described in this paper.