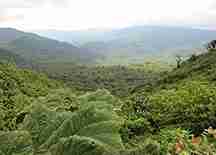 When considering the places that have embraced renewable energy, one typically thinks of affluent, highly developed regions, such as Denmark, Germany, or California. However, the transition from conventional power to wind, solar, biomass and other forms of renewable energy is happening around the world1.

A region that is frequently overlooked is Central America. While Costa Rica’s achievement of procuring 98-99% of its electricity from renewables on an annual basis is widely celebrated, Nicaragua and Honduras have also been among the global leaders in the use of wind and solar to satisfy their electricity demand.And while each of these three nations has its own trajectory, together they can provide lessons for other regions. 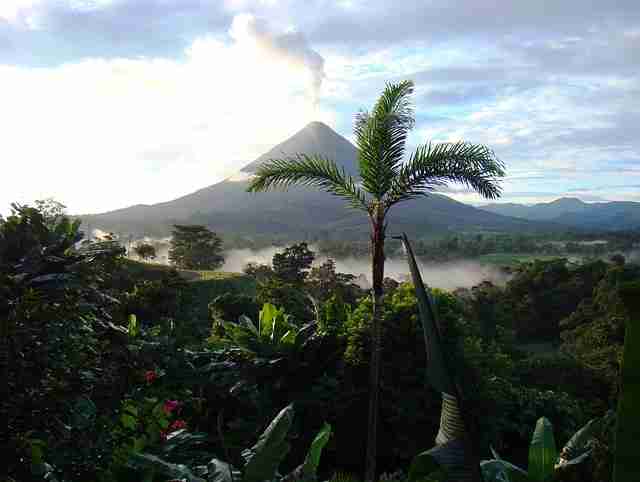 The most stable of Central American nations was also the first to embrace renewable energy. Costa Rica has extensively developed its plentiful hydropower resources and has led the region in electrification2. In 1994 the nation also built its first geothermal plant, a 63 MW project in the Miravalles field, which was followed by other projects in the late 1990s3.

The emphasis on renewable energy fits well with Costa Rica’s strong emphasis on environmental protection, which has been a priority for the nation since it abolished its military in 19496. Costa Rica is now aiming to reduce reduce carbon emissions in its electricity sector in part through electrification, as part of a wide-ranging plan to address Climate Change7. 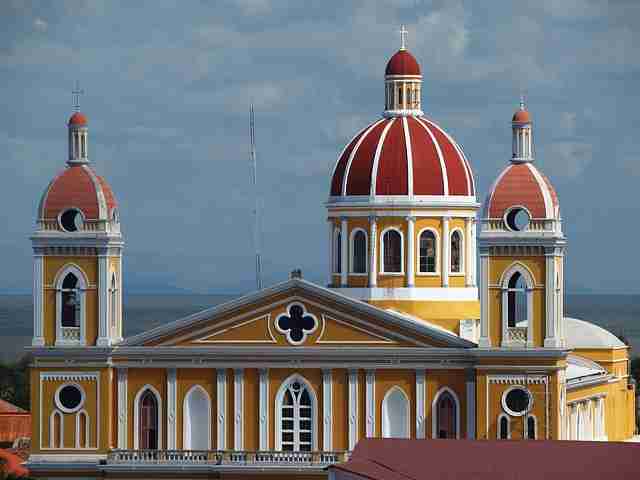 By contrast, Nicaragua had compelling economic reasons to move to new forms of energy. The nation built less hydroelectric capacity than its neighbors, and instead aggressively installed diesel-fired power plants in the late 1990’s8. This led Nicaragua to become the most fossil-fuel dependent nation in the region in the first decade of the 21st century9.

This dependence had consequences. Increases in oil prices in the early 2000s led to financial trouble in the nation’s electricity sector, and in 2005 the National Assembly passed a law offering grid priority and long-term contracts to renewable energy generators10.

This came too late, and in 2006 Nicaragua suffered an energy crisis which included widespread electricity rationing. Addressing this crisis was a priority for incoming president Daniel Ortega in 2007, who reformed the nation’s energy authority, charged it with solving the energy crisis and put it on a path to long-term planning11.

Under Ortega, Nicaragua has set aggressive plans for large-scale renewable energy development. The nation did not build its first large-scale wind plant until 2009, but also completed large projects in 2012 and 2014. In both 2014 and 2015 Nicaragua generated more than 20% of its electricity from wind, putting it roughly on par with leading European nations such as Spain, Portugal, and Ireland12.

Including geothermal and biomass, Nicaragua has sourced more than 40% of its electricity from non-hydro renewables each year since 2014, one of the highest portions of any nation on earth13. While in 2015 the Ortega government pledged to move from roughly 50% renewable energy (including hydro) to 90% in Nicaragua’s electricity mix in 2020, the latest electricity expansion plan envisions that Nicaragua will reach 73% renewables in 203014. 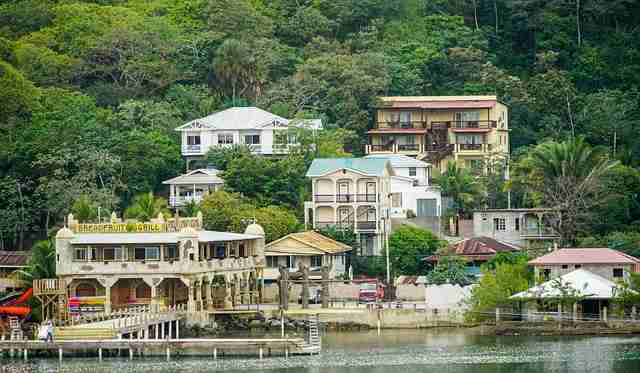 After Nicaragua began transforming its electricity mix, it has no longer been the nation most dependent 15upon imported fossil fuels for electricity. Instead, despite a larger base of installed hydropower, Honduras has been the most dependent.

Following on the experience of Costa Rica and Nicaragua, Honduras installed more than 100 MW of wind in 201116. However the real action came in 2013 when the nation implemented a feed-in tariff17. Unlike the European model small-scale generation was not included. The policy had a minimum capacity requirement and served to deploy a large volume of big solar plants quickly.

International developers flocked to Honduras to take advantage of the feed-in tariff. Relative to its size, the nation’s boom from 2014 through 2016 was the most rapid deployment of solar in the world to date18. When the policy was implemented Honduras had no large-scale solar projects, and by the end of 2016 it had 409 MW online, nearly 2/3 of the entire solar capacity in Central America19.

In 2016 Honduras became the first non-island nation in the world to source 10% of its electricity from solar20. However, the feed-in tariff has also been wracked by scandal, with project owners complaining that they are not being paid21.

Renewables in the big picture 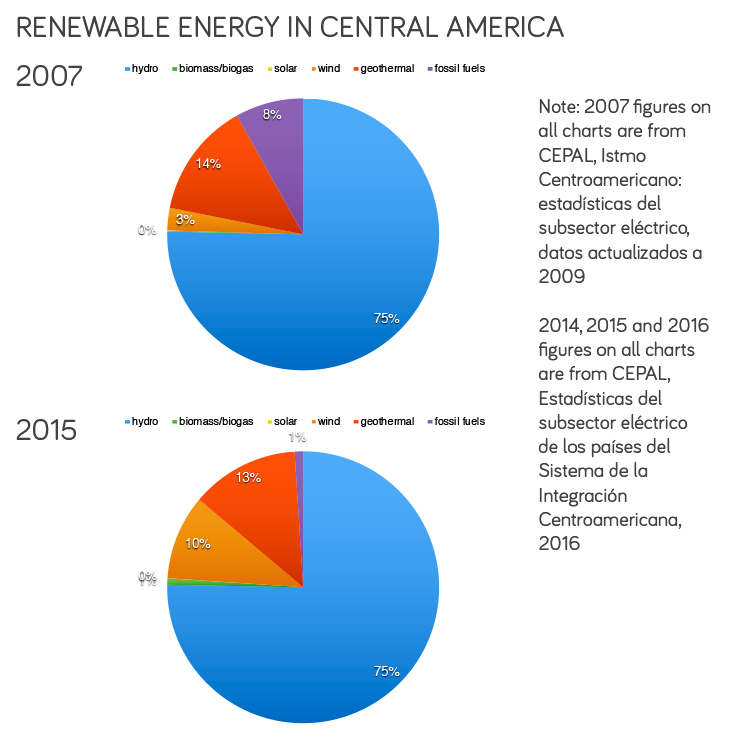 There are both similarities and significant differences between the experience of Central America and more affluent regions that have deployed high volumes of renewable energy. Like Nicaragua and Honduras in the 21st century, California and Denmark were highly dependent on imported petroleum in the 1970s, and in both cases periods of high oil prices and limited supply were followed by deployment of renewable energy22.

In Nicaragua, as in California and Denmark, renewables are credited as a means to reduce greenhouse gas emissions. However, in Central America the economic pressure to limit exposure to fossil fuel imports has had greater urgency23.

If anything Central America is even more dependent upon imported oil than Western nations, due largely to its geography. The isthmus of Central America has a limited electricity connection to Mexico and none with South America, as well as possessing limited domestic fossil fuel resources and no pipelines to bring in gas. Additionally the region has no nuclear reactors, which means that in many places imported oil generation is one of few non-renewable options24.

There are other differences. Western Europe and the United States have near-universal electricity access, stable population levels and flat to falling electricity demand growth. By contrast Central American demand is growing rapidly, both as a result of increased electrification as well as growing economies and populations.

And so unlike the United States where older fossil fuel-fired power plants are being rapidly retired, with the exception of Costa Rica Central American renewables are adding to fossil fuel generation, not replacing it25. Instead renewables are providing cheap power at stable prices, which can raise living standards and boost economies26.

2016 data indicates that the region is getting 17% of its electricity from non-hydro renewables27. This is higher than in the United States or China, and while it remains a lower level than many Western European nations, Central America’s periods of rapid deployment came later. Furthermore, during the periods of rapid deployment in Nicaragua (2009-2014) and Honduras (2014-2016) the share of renewables increased faster than has been achieved in any Western European nation to date28.

But despite the benefits that renewable energy is bringing, deployment has again slowed since Honduras’ solar boom. And while Panama, El Salvador and Guatemala are all procuring renewable energy through various means, there have been no efforts yet that have yielded the dramatic results that have been seen in Costa Rica, Nicaragua and Honduras.

These three nations have demonstrated that even poor nations can quickly deploy renewable energy when the political will is present, and that small nations can also have rapid energy transitions.

(13) For Nicargua see ibid, p. 79; total non-hydro renewable energy calculations for other nations are the author’s from a variety of sources. In 2016 only Denmark and Iceland had a higher portion of non-hydro renewables; although Uruguay had roughly similar levels to Nicaragua.