CO2 refrigeration systems not only easily replace existing systems, but they also offer a short payback period of 0-6 months and boast an Ozone Depletion Potential (ODP) of 0. With regulations such as the United States’ Environmental Protection Agency’s (EPA) Significant New Alternatives Policy (SNAP) and Canada’s Environment and Climate Change organization demanding the reduced use and eventual phase-out of CFC/HCFC/HFC-based synthetic refrigerants by 2030, it is evident that CO2 refrigeration systems offer both a cost effective and environmentally conscious solution.

A comparative study that examined the cycle modification strategies for trans-critical CO2 refrigeration cycles in warm climatic conditions (Simarpreet 2016) states that CO2, a natural refrigerant, is considered to be safe, economical and environmentally sustainable. Operationally, the winemaker will benefit from the ability to simultaneously heat and cool the winemaking equipment to ultimately control the quality of the product.

Lower costs accompany the process efficiencies and are realized by:

The EPA and Canada’s Environment and Climate Change organizations define and develop programs to protect the stratospheric ozone layer. This natural shield gradually depletes due to man-made chemicals like CFC’s, HCFC’s and HFC’s, chemicals widely used in air conditioning and refrigeration.

Internationally, the accelerated phase-out of the production and import of ozone depleting substances aims to incrementally decrease HCFC/HFC consumption and production, culminating in complete HCFC/HFC phase-out by 2030. HCFC/HFC usage must be reduced to at least 99.5 percent below 2015 baseline levels by 2020.

The EPA’s SNAP reviews refrigeration input substitutes within a comparative risk framework in refrigeration and air conditioning. SNAP also provides a current summary of refrigerant substitutes for HCFC-22 and Blends Containing HCFC-22 and/or HCFC-142b. As of 1999, refrigeration systems using recaptured liquid CO2 have an ODP of 0 and do not have any atmospheric exposure limits.

Aleksander Kostic, P.Eng at Neelands Refrigeration Limited (personal communications, May 2016), gathered data for a simulated yearly energy consumption of a two one-stage R507 systems without heat reclaim, and a two-stage transcritical CO2 booster system without heat reclaim. Each system operated for one year and used the same controlled yearly load profiles and weather conditions throughout each simulation. A summary of the simulation’s results shown below demonstrates the cost savings and environmental advantages of switching from a CFC/HCFC/HFC input based system to a CO2 transcritical system.

In order to understand how wineries can benefit from the transition from existing CFC/HCFC/HFC input based systems to CO2 systems, benchmark data provided by the Wine Council of Ontario is analyzed. The benchmarking studies undertaken for Ontario wineries (Martin, 2006) analyzes the energy distribution in a winery and then breaks down the energy consuming activities that result from cooling equipment and air conditioning

4.1 Energy distribution in a winery

Martin gathered data from 16 wineries for this benchmarking case study and identified a relationship between the size of wineries and energy consumption. Figure 1 (Martin 2006) demonstrates that the energy intensity (total energy consumed per unit of production) rates can range from .21 kWh/L of wine produced to 1approximately 1.6 kWh/L. The smallest wineries, characterized by the production of less than 100,000 liters per year, were proportionately less energy efficient than medium (100,000 L – 700,000 L) or large wineries (greater than 700,000 L) due to economies of scale.

The study also established that there is no relationship between the energy efficiency and the age of operation and/or the product mix within each winery. As a result, it cannot be assumed that an old winery is automatically disadvantaged in relation to energy costs when compared to a new winery.

Martin defined a “benchmark winery” as a winery at the 20th percentile consumption mark of all the wineries reviewed in the case study. The benchmark identified was 0.55 kWh/L of wine processed. Of the approximate 0.50 kWh/L, the following winery processes consumed energy (See Figure 2). 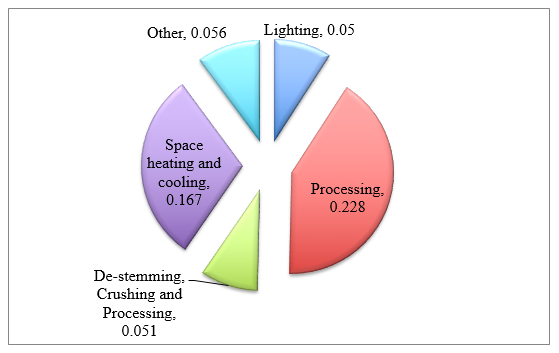 Within the category “processing,” energy consumption was further broken down in Table 1 (Martin, 2006):

In simple terms, wine undergoes three major processes: fermentation, clarification and stabilization, and aging and storage. Wine processing requires approximately 41% of the total energy used in the production of a liter of wine. Space heating and cooling consumes 30%, de-stemming, crushing and pressing, 9%, lighting, 9%, and “other”, 10%.

The energy intensity distributed amongst the primary winemaking processes varied from a low of 0.03 kWh/L to 1.05 kWh/L. The actual energy intensity for the 16 wineries studied varied considerably (Martin 2006).

The range of energy intensity indicates that there is considerable potential for improving energy efficiency in many wineries.

Regardless of the size of the winery, the main energy expense for a winery is refrigeration. 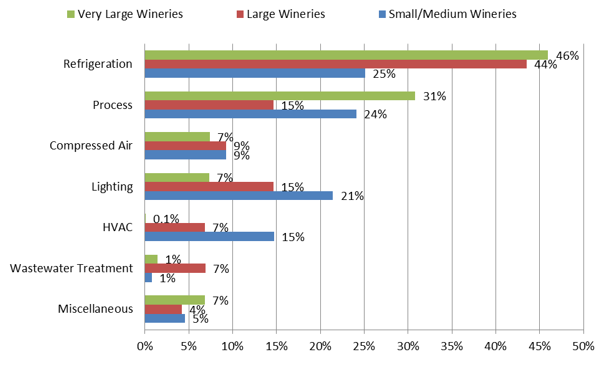 According to the Figure 3, provided by BASE Energy Inc. (2013), refrigeration accounts for approximately 45% of electricity consumption, although the biggest expense is capital equipment costs (tanks, pumps, motors, etc).

Aleksander Kostic, P.Eng at Neelands Refrigeration Limited (personal communications, May 2016) and General Manager and Winemaker, Gordon Robert, at Marynissen Estates in Niagara-on-the-lake, Ontario, inaugurated a transcritical CO2 system in 2015. Both Aleksander and Gordon report several benefits of a CO2 system compared to a HFC input based system:

Temperature Control: Robert reports the CO2 system allows him to maintain highly efficient temperature control. Precise temperature control gives the winemaker even greater overall control of the winemaking process. According to a business article educating HVACR managers (Brown, C, Chon, J 2013) HFC refrigerants compared to CO2 display higher density and better heat conductivity, which allows more efficiency of the heat exchanger used in heat reclaim systems. Also, when in a supercritical state, temperature and pressure can be controlled independently and more efficiently. The nature of transcritical technology also benefits the heat reclaim functionality and allows the capacity from the heat reclaim to be varied from 0 to 100%. According to Kostic, when taking all parts into account, the efficiency of CO2 in a heat reclaim system can lead to improved performance from 25 to 150%, compared to an HFC alternative.

Space: The compressor station and piping are smaller than previously used HFC equipment, which reduces the mechanical room footprint. Copper pipes are approximately half as large or less than HFC pipes, depending on the size of the refrigerant.

Replacement: CO2 systems are considered to be the perfect replacement for HFC systems, which will be phased out in Ontario by 2023, for the reasons discussed in this article.

Process efficiency:  CO2 has a high refrigeration volumetric capacity. A CO2 compressor delivers approximately 10 times as much cooling as the same compressor with R22 or ammonia. CO2 also has a high convective heat transfer coefficient and requires less refrigerant charge than traditional HFC systems. It should be noted that there is not a reduced price per kWh based on the CO2 refrigerant itself, but rather a reduction in the energy spent in kWh/L due to a more efficient system.

6. Energy and cost savings per bottle

The cost per bottle of wine produced and bottled in a winery is calculated by breaking out the total direct (grapes, bottle, label, corks, capsule, etc.) and indirect costs (utilities, salaries, maintenance, tools and equipment, etc.) over the number of bottles produced. The accounting principles for wineries are complex, which makes calculating the exact cost savings realized by cutting back on the cost of refrigeration complicated to measure. Each vintage and wine type will have different cost characteristics because wines have different production periods and processes (Jakubiak, J 2010).  It can be quite a challenge to track these separate costs. Some wineries separate costs by department, including crush and ferment, cellar, bottling, and storage, and then allocate additional general and administrative costs based on a determination first of how much of a particular general and administrative cost is actually related to production, and then assigning that portion of the cost to the various products based on volume of wine produced.

Refrigeration makes up anywhere from 25% (small wineries) to 45% (large wineries) of total indirect costs, as shown in Figure 3. Wineries can take advantage of the significant cost saving opportunities that accompany the installation of a CO2 transcritical system that results a more flexible and competitive gross margin based on the lower cost per bottle.