A View on Hydropower Training
by Prof. David Williams on behalf of
the British Hydropower Association

The continuing acceleration of global hydropower development provides a need for much more training in the subject, writes David Williams.

The fight against climate change has brought global incentives for renewable energy resulting in the growth of new hydropower projects and refurbishment and upgrade of existing ones over the last decade.

With this increase in activity, the hydropower sector has grown rapidly in all types and size of projects. Equipment manufacturers, consultants, civil contractors, grid companies and other related activities have had to rapidly expand especially in manpower resource.

So why has there been an absence in mainstream training in hydropower in response to the growth in the industry?

This paper will review work on training undertaken in the United Kingdom and suggest ways in which this could be increased and diversified to fulfil the hydropower sector’s needs.

The major single difference between hydropower and other forms of energy generation is that generation has to be on a water source – be it river or tidal – not necessarily close to where the energy is to be consumed.

Hydropower is also unique within renewable and non-renewable energy technologies in its diversity of project type and size and the effect of varying heads of water. (Head is basically pressure measured in metres from the level at which water is taken at reservoir or weir into the circuit containing the water turbine to the level at which it is returned to the river or the centreline of the turbine dependent on the type of turbine used. In tidal hydropower, the head is the difference in water levels on either side of the barrage.)

There are many views on the size banding for hydro projects. The following is the generally accepted capacity ranges in the United Kingdom:

The main reasons for these bands are:

Run-of-river schemes can occur in all categories but are more usual up to 20MW. Storage again can be in any category but is never seen in pico or micro hydro bands and is common above 20MW.

Pumped storage is usually above 100MW but there are now more projects being considered in the medium hydro range. This is due to increased intermittent energy production now being available (mainly on and offshore wind).

Tidal power is only viable in the large hydro band.

The head available for hydro projects varies with topography. Matching water head and flow rate to provide optimum generation is a complex process. Simply stated, a higher head project for a given power capacity will require a lower flow rate than lower head schemes. This results in a smaller, faster rotating water turbine and generator which makes for cheaper equipment. However cost variations and other issues will require a complex study taking some or all of the following into account: 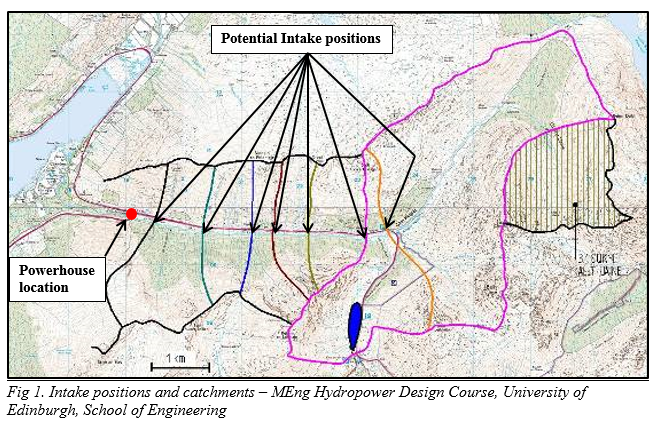 Hydropower is therefore diverse in many ways.  Training in the various aspects and nuances of the subject is consequently important as interest in the subject grows and the building of hydro schemes accelerates globally.  However, because of the diversity of the subject, training must be carefully structured to cover appropriate aspects. These will vary from country to country and with government, developer, manufacturer, supplier and service provider needs.

For comparison, Table 1 reviews the status of hydropower development in four different countries. It is difficult to draw immediate conclusions on the training requirements for these countries since more employment opportunities exist in the United Kingdom than all the others at present.  It can be assumed, perhaps, that although with hydropower producing the bulk of a country’s electricity it does not follow that it requires more training to maintain this position. A developing country, such as Sri Lanka, will want as much training it can afford to ensure local employment and more independence from larger countries.  The requirement for hydropower training continues to grow and we can now see good opportunities for developed and developing countries.Table 1. Sources – The International Journal of Hydropower & Dams 2014 World Atlas and Industry Guide and UNIDO/ICSHP World Small Hydropower development report  2013

Renewable energy technologies are often reviewed together merely because they are all renewable. Each technology is different and it is very apparent that this is true of training requirements and course content. 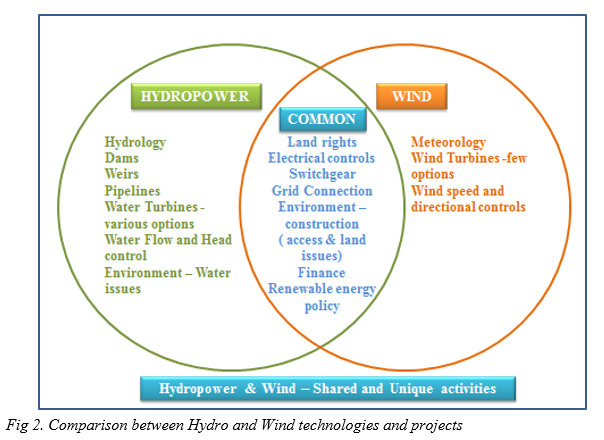 This analysis of the components of hydropower and wind projects shows that there are some common elements but few in comparison to the diverse technical and regulatory aspects.

It is therefore preferable to have training for specific technologies and not try to cover the whole renewables field.

The only exceptions to this are the one, two or three year university engineering courses at bachelor and masters levels. In these cases there is time to cover a number of renewable areas and, hopefully to provide room for constructive comparison between them!

The component parts of a hydropower project are as shown in Fig 3.: 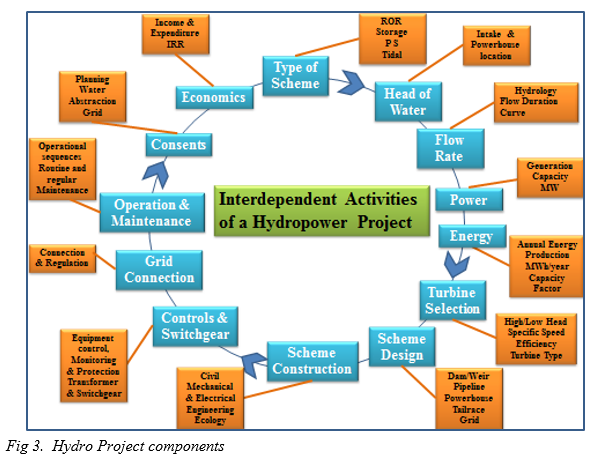 One further complexity of a hydropower scheme is the iterative process which means that the above loop of decision making has to be repeated a number of times. For instance, the planning of a run-of-river scheme has commenced using a chosen intake which has led to calculation of head, flow rate, power and potential energy production.  This is the basis of any scheme design.  However, other intake positions (see Fig 1) must also be reviewed to check for optimum energy capture for the project.  As the process continues and the other components are considered as shown above, there will always be changes made to accommodate other factors, e.g. better access for grid and powerhouse position.  One small change of any component will affect others and so a composite and methodical iterative review must be undertaken to arrive at the best and most appropriate option.  This is one of the most important factors to be learned at a hydropower training course.

The following is not an exhaustive list but covers the type of courses available and includes two descriptions (in italics) of specific courses in which the author has been involved.

Universities in Europe and North America and a few others include a hydropower element in bachelor and masters courses (as described above).  These are generally offered in engineering departments and frequently as part of courses in sustainable/renewable energy.  The content is limited to engineering aspects of hydropower schemes.

The University of Edinburgh, School of Engineering Group Hydro Project is different in that it involves the three engineering disciplines. Fourth year (of five) MEng students can select this course as one of four options. Groups of between five and seven students from mechanical, electrical and civil engineering disciplines are given a valley in Scotland and asked to design an “optimum” scheme for the valley from rainfall to assessing economic viability. Lectures are provided in areas which they have not encountered on their general degree courses and they are initially required to draw up a project plan with a detailed programme of work for the ten weeks of the course. University staff and a visiting professor monitor progress and supply support at weekly “surgeries”.

The dependency of component parts of the project on each other and the iterative nature of the challenge is emphasised throughout. Interim and final reports are submitted and the project concludes with oral presentations from the groups to the university staff.

The project has been operating for eleven years and student feedback has been very positive citing chiefly the ability to work on a “real project”, to work with students from other disciplines and the assistance it has given students when searching for employment.

These courses are mainly relevant to developers, consultants, manufacturers and suppliers of equipment and services, regulators and government departments, to provide an introduction to hydropower where incentives for renewable energy and government objectives have brought new people into contact with the world of hydropower.

They are delivered by trade associations, engineering institutions and individuals who frequently invite guest speakers to talk on their specialist topics and the courses range from one to five days.

In many cases, the participants have some knowledge of one or more of the topics presented.  The reason for attending the course is to “fill in the gaps” so that the whole subject of hydropower does not feel too large and daunting and to learn how component parts link together.

Some courses include a visit to one or more hydropower sites.  It cannot be stressed how useful this is as an adjunct to the formal course. To give a practical illustration of the main presentations and course notes a site visit gives reality and confirmation to the course.  Discussions with the site owners or operators are also invaluable for direct experience on aspects of planning, building and operating the scheme.

Recent examples of this type of course: 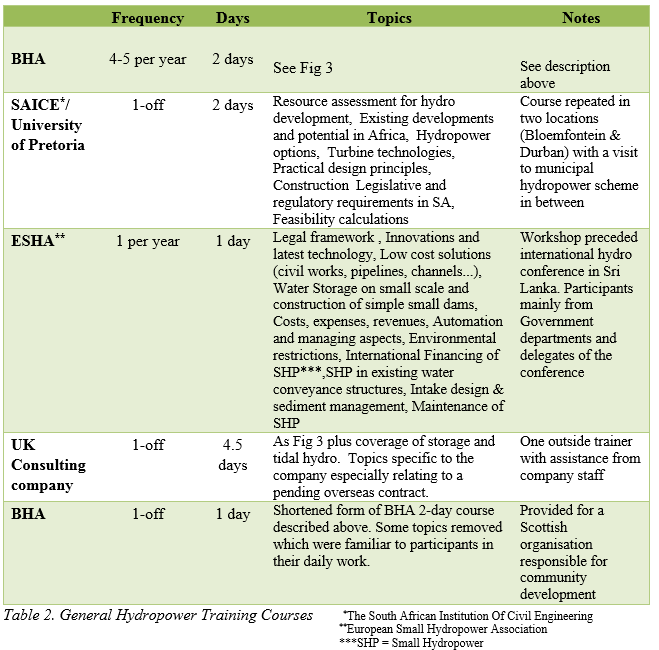 The British Hydropower Association (BHA) has given nine two-day hydropower courses over the last two years. These have been in different parts of the United Kingdom – all at places within easy reach of one or more operating hydro projects. The subject covers run-of-river projects up to 5 MW and includes all the topics given on Fig 3 above. The individual presentations are interspersed with practical exercises. Site visits are made at the end of the first day and the chosen venue for all courses in 2015 includes visits to two low-head sites and one high head site.

Participants have come from many different areas. Nearly all have wanted either an introduction to hydropower to assist in a new job or change in career or investment path or to learn about other aspects of hydropower development which they think will assist in “filling the gaps”. The mix of participants has led to good constructive discussions which assist the two trainers in providing a totally inclusive course.

You can find out more about the courses here.

The continuing acceleration of global hydropower development provides a need for much more training in the subject.  Due to its complex structure, cross-disciplinary nature and sub-divisions of expertise, one course cannot be designed to fit all cases.  Universities must be encouraged to include an element of hydropower in its engineering and sustainability courses.  We must also consider the education of schoolchildren in what hydropower entails to introduce this valuable form of renewable energy and sow the seed of potential careers in hydropower later in life.

Hydropower courses, if they are to cover all aspects of the subject, cannot be included under a general course covering, say, sustainable energy.

It is impossible to design a single hydropower course which will satisfy all the demands of the market.  The topic is too complex and each course (or type of course) should be tailored to suit individual requirements of the participants. This makes the case for as many “bespoke” courses as appropriate.

We are certain that hydropower will continue to be important as long as politicians do not lose sight of the importance of trying to offset global warming. A survey is required urgently into specific hydropower training needs in all countries and a plan made within the industry as to how this should be tackled most effectively.

David Williams initially worked for Gilbert Gilkes and Gordon Ltd. from Sales Engineer to Manager of the Hydropower Department.

From 2000 to the present he has first been UKTI’s Hydropower Export Promoter for five years and then as the British Hydropower Association’s Chief Executive, retiring in January 2014.

In 2004 he was engaged as a Visiting Professor at the University of Edinburgh, School of Engineering and he continues to run an annual ten-week course for MEng undergraduates on the design of a hydro scheme from rainfall to selling energy.