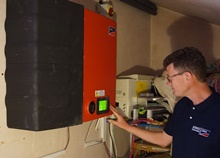 Over 1 million people across the country are living in houses powered by Solar Energy:

The citizens of Britain have been building the foundations for a sustainable solar future for two decades, under the radar, and against many odds, not least the barriers placed before them by many of the interested vested in Big Energy. UK now has over 8GW of installed PV energy of which around 2.3 GW is in domestic systems. The UK has only 9.4GW of installed nuclear capacity much of which is scheduled for cripplingly expensive decommissioning over the next decade or so. Solar energy is the People’s Power of choice: Safe, Clean and increasingly affordable for all.

In 1995 I installed the first integrated solar roof on my own home in Oxford, despite facing opposition from the energy industry at the time and being told by the Government that it would never work “because there is not enough sunshine in Britain”. The solar panels are still generating electricity and hot water and generate enough heat and electricity to ensure that this six bedroom home still has one of the lowest carbon footprints for any building in Britain. Averaged over the last 20 years the house uses only 13.2 kWhm2 of gas and electricity and produces only 4 kg CO2 m2 each year, a fraction of the impacts of most modern buildings.

My solar roof helped light the spark that started the UK solar revolution and 20 years later over 1 million people across the country are living in houses powered by solar energy and by the end of 2015 it is predicted that there will actually be over 1 million solar roofs in Britain. My PV roof system cost me £28,000 and to build it I needed to change Local Planning and Building Regulations Guidance on PV roofs and partner with Southern Electric to pioneer the first grid-connection agreement developed by an energy company in Britain. Today you can get a roof with 4Kwp of PV for your home for less than £5000.

The 1 – 1 million solar roof celebration, sponsored by Oxford’s OPUS Energy, was held in the garden of the Oxford Ecohouse and was joined by many of UK’s great solar pioneers who each had their own story to tell of the path they had taken in working for a cleaner energy future for all. Also there were people with a myriad of pioneering solar projects on local schools, village halls and businesses to as well as community energy schemes and solar co-operatives and local energy companies.

The rate and scale of the expansion of the UK solar markets has been phenomenal, but as with all renewables that harvest clean free energy from the sun and air they are only intermittently available. Therefore the ability to store them and use them when needed represents the next great step towards a 100% renewable energy lifestyle and society. The case study of the Oxford Ecohouse, the first solar roof in Britain, demonstrates an exciting potential for the use of domestic solar batteries in both reducing imported grid energy and exported carbon emissions from the property.

Figure 2. Renewable Energy Capacity as
at the end of the first Quarter of 2016  .

In the first quarter of 2016 25% of all UK energy generated was from renewable sources Renewable electricity capacity was 31.2 GW at the end of 2016 Q1, a 11.8 per cent increase (3.3 GW) on a year earlier, and a 2.4 per cent increase (0.7 GW) on the previous quarter. Of the 0.7 GW increase in 2016 Q1, over half was due to new, mainly large-scale, solar photovoltaic capacity.  According to Solar Intelligence analyst Finlay Colville, the UK installed 1.553 GW of new solar PV capacity during the first quarter of 2016 .  There are currently around 10 GW of installed solar capacity in the UK as opposed to 9.3 GW nuclear capacity and 9 5 GW onshore wind.

The bulk of the installed solar capacity is in commercial solar plants but a substantial and growing number are on domestic roofs.  The first integrated solar roof in Britain was installed on the Oxford Ecohouse, in the face of considerable scepticism from the UK PV industry who were promoting concentrating solar energy at that time as being a more ‘efficient’ form of generation.  The UK Government, long term proponents on the ‘nuclear future’ and were historically imbued with the mantra that solar would never work in the UK “because there is not enough sunshine in Britain”.  With a lack of any fiscal support from the government and in contrast to the strong financial incentives in place in Germany from 1990 when their 1000 roof programme was started, slowly the numbers of domestic solar installations grew.  Some fifteen years later in 2010 the UK implemented a programme of feed-in tariffs .  By this time the price of PVs had fallen to the extent that the uptake of these tariffs was immediate and enthusiastic, by both domestic and commercial installers.

On July 7th 2015 a party was held in the garden of the Oxford Ecohouse, 20 years after the commissioning of the PV roof there that helped spark the UK solar revolution. They were celebrating the fact that there were one million British homes, out of the twenty five million UK homes, that then had a solar system on their roofs. The Oxford Ecohouse was occupied in April 1995 and was built with an integrated roof including a 4kWp of BP Solar array of Saturn 585 photovoltaic panels; 5m2 of AES Solar, solar hot water panels and two Velux roof lights integrated into the single south facing roof. A full description of the house can be seen in Roaf et al. (2012 ). The actual building of that first PV roof required the re-writing of local Planning Laws and Building Regulations Guidance and in partnership with the Southern Electric utility, the pioneering of the first domestic grid-solar connection agreement in Britain. The solar panels are still working well, generating both electricity and hot water despite having had no maintenance over their lifetime save for one pump replacement for the hot water system. In 1995 the integrated solar roof cost around £28,000 including £18,000 for the at cost PV panels, the cost of manufacturing the novel aluminium support system and the bulk of the related systems in use. The PV system then had a 66 year payback. Today similar PV systems could cost less than £5000 to install on an existing home and with feed-in tariff support on adjacent homes have a payback of around 6-10 years.

But the full solar dream is to have homes that rely almost 100% on the energy they can harvest from their own environs. The Oxford Ecohouse was already one of the lowest energy homes in Britain with a passive low energy design has highly efficient white goods and these were manually activated, typically when it is sunniest. Its PV panels have an annual solar yield of around 2200kWh. So now the home has gone the next step and in May 2016 installed a Sunny Boy Smart Energy battery system in May 2016. Previously the self-consumption rate of electricity from the solar roof was around one third, and on measured outputs that has now risen to around ninety percent, resulting in a CO2 emissions reduction of around 1,200 kg per annum. To install this the Sunny Boy PV invertor was upgraded with a Sunny Boy 3600 Smart Energy system with a 2kW capacity lithium-ion battery and a SMA Energy Meter, Sunny Home Manager.

These readouts enable occupants to look at their lifestyles and explore how to ultimately cut their emissions over the day to as close to zero as possible. In this case the charging of the electric bike at night can be shifted to during the day and also some of the point loads can be staggered over the day when export rates are higher. The occupant of this house is about to retire and this will also affect the energy use patterns over the day and week. The next major steps are to reduce energy consumption will be to look carefully at the 180 watt baseload and to replace all the low energy lighting with LEDs. The step after that is to revisit the design and management of the gas boiler backup systems, controls and displays and tackle the solar hot water matching and proficiency. The house is already approaching near Zero Carbon and is a leading European exemplar of what can be achieved, first and foremost with good house design.

Just before the One to One million Solar Roof party at the end of June 2015 the UK Energy Minister, Amber Rudd, at the Department of Energy and Climate Change (DECC) informed the solar community that “as you may know the (UK) government’s position remains that we are committed to seeing solar PV, including wide-scale deployment across community homes and rooftops”.  By the end of January DECC had implemented a sixty five percent reduction in feed-in tariffs and that resulted in a seventy-four percent reduction in the installed capacity by small solar power installations compared with the same period in 2015.

The UK Solar Story shows how popular PV has been amongst ordinary citizens.  The addition of battery capacity into the domestic systems may add £2-3,000 to the cost of the basic array and will most likely appeal to particular market demographics.  This must include those who are approaching retirement and not only may have available lump sums to invest in reducing their dependence on irrationally and escalating domestic energy costs and establishing for themselves a degree of energy security that no other source of energy offers them.  For this demographic it is easy to predict a significant uptake of the addition options for battery inclusions, not least to their own existing solar arrays, particularly at the point of upgrading their existing invertor.  A reassuring result of the close monitoring of the Oxford array is that its performance over the last 21 years of operation has been nominal, considering that some predicted a twenty to twenty five year lifespan of PV panels at a time when none had been measured over such periods.

Figure 8.  7th July Celebration of the 1- 1 million solar homes in Britain with over 80 members of the solar community old and new at the Oxford Ecohouse, the first UK solar roof, sponsored by OPUS Energy.